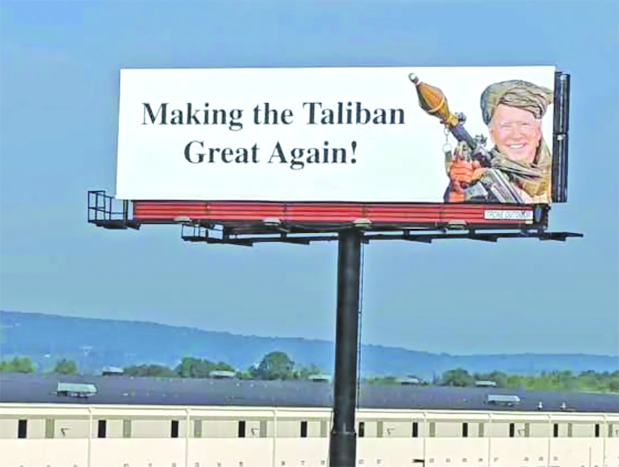 One of the billboards showing Biden as a Taliban militant

Several billboards showing US President Joe Biden as a Taliban terrorist, with an accompanying slogan, have popped up in Pennsylvania.

Former Pennsylvania state senator, Scott Wagner, a Republican, is reportedly the brains behind the billboard.

America’s withdrawal of its troops from Afghanistan, after 20 long years, have not gone down well among people in the country as well as across the globe.

The nature of the “hurried exit” has been the cause of the chaos and humanitarian crisis in Afghanistan, many have claimed.

And now as proof of this disappointment against its President, a bunch of billboards have reportedly come up across Pennsylvania, which shows Biden as a Taliban terrorist, with an accompanying slogan – “Making the Taliban great again”!

According to news reports, Wagner reportedly rented out a dozen billboards across highways at a cost of about $15,000 to express his anger and that of his countrymen.