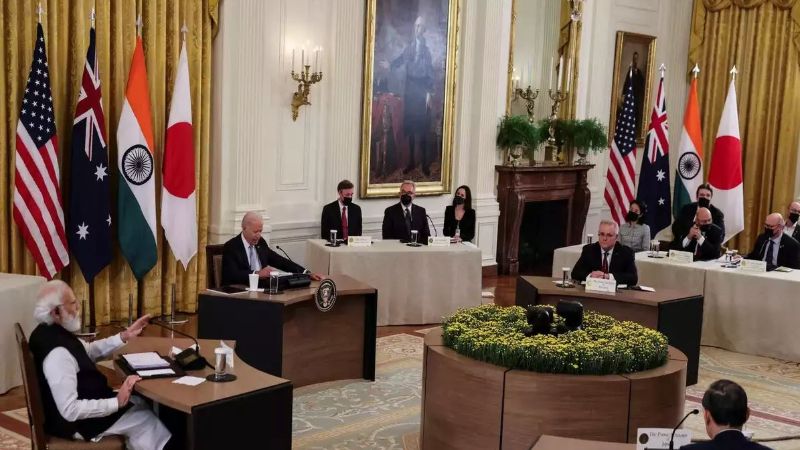 WASHINGTON - Leaders of the United States, Japan, India and Australia vowed on Friday to pursue a free and open Indo-Pacific region "undaunted by coercion" at their first in-person summit, which presented a united front amid shared concerns about China.

The two-hour meeting at the White House of the Quad, as the grouping of four major democracies is called, will be watched closely in Beijing, which criticized the group as "doomed to fail."

While China was not mentioned in the public remarks by the four leaders or in the lengthy joint statement and a factsheet issued afterwards, Beijing was clearly top of mind.

Their statement made frequent mention of the leaders' insistence on rules-based behavior in a region where China has been trying to flex its muscles.

"Together, we? recommit to promoting ?the free, open,?rules-based order, rooted in ?international law and undaunted by coercion, to bolster security and prosperity? in the Indo-Pacific and beyond," they said.

The Quad leaders also voiced support for small island states, especially those in the Pacific, in order to enhance their economic and environmental resilience.

Additionally, they urged North Korea to engage in diplomacy over its nuclear weapons and ballistic missile programs, which Pyongyang has refused to do unless international sanctions are dropped.

After the meeting, Suga told reporters the countries agreed to cooperate on vaccines, clean energy and space, and to hold a summit meeting every year.

Modi told his fellow Quad leaders India would permit export of 8 million Covid-19 vaccine doses by the end of October under a deal the grouping reached in March to supply a billion doses to the Indo-Pacific, India's foreign secretary said.

The plan to supply a billion doses across Asia by the end of 2022 stalled after India, the world's largest vaccine producer, banned exports in April amid a massive Covid outbreak at home.

India has said when it restarts vaccine exports it will prioritise the COVAX international vaccine initiative and neighboring countries.

The Quad announced several new pacts, including one to bolster supply chain security for semiconductors and to combat illegal fishing and boost maritime domain awareness.

It also rolled out a 5G partnership and plans to track climate change.

"Acknowledging the role of governments in fostering an enabling environment for 5G diversification, we will work together to facilitate public-private cooperation and demonstrate in 2022 the scalability and cyber security of open, standards-based technology," the leaders said.

The meeting came just over a week after the United States, Britain and Australia announced an AUKUS security pact that will provide Australia with nuclear-powered submarines, a move roundly denounced by Beijing.

A Japanese government spokesman said Suga told the meeting that Japan considered the AUKUS partnership to be "taking an important role for the peace and stability of the Indo-Pacific region."

U.S. officials had sought to play down the security aspect of the Quad before the meeting, even though members carry out naval drills together and share concerns about China's growing power and attempts to exert pressure on all four countries.

Morrison said AUKUS and the Quad were "mutually reinforcing."

He told reporters, "That's the whole point of the Quad and AUKUS. They're not there to replace anything but to add to it."

In a briefing on Friday a Chinese foreign ministry spokesman appeared to criticize the Quad, or Quadrilateral Security Dialogue, as it is formally known.

"A closed, exclusive clique targeting other countries runs counter to the trend of the times and the aspirations of regional countries," said the spokesman, Zhao Lijian.

"It will find no support and is doomed to fail."

China has denounced the Quad as a Cold War construct and says the AUKUS alliance would intensify a regional arms race.