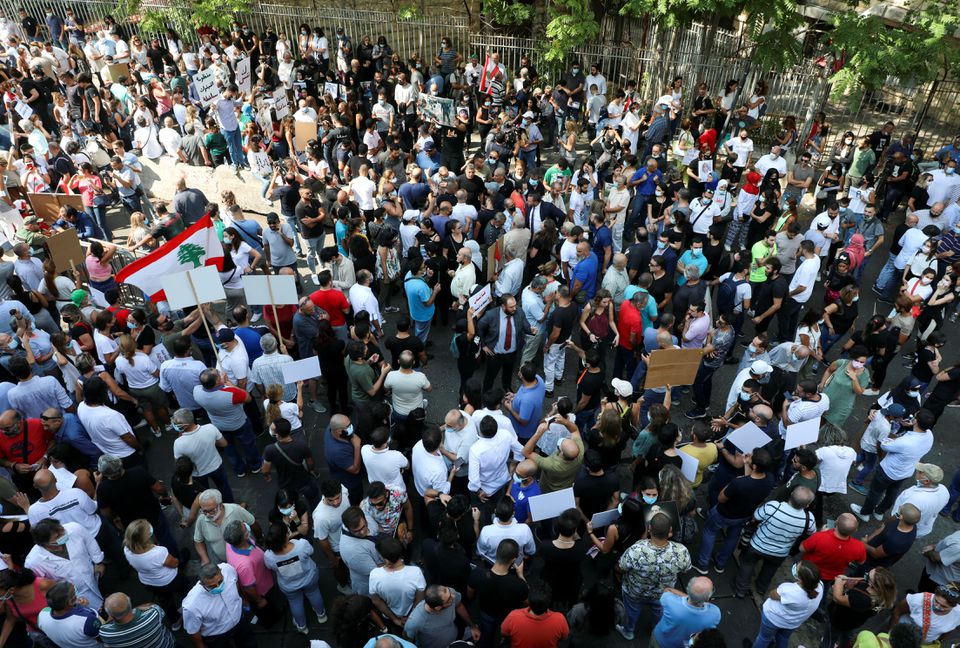 Demonstrators carry banners and flags during a protest in front of the Justice Palace after a probe into Beirut blast was frozen, in Beirut, Lebanon September 29, 2021. REUTERS/Mohamed Azakir

Hundreds of relatives of victims of last year's Beirut port explosion, some chanting and some silent, took to the streets on Wednesday angry that an investigation into the disaster had been delayed for the second time this year.

Some carried miniature figures of people on death row with signs below reading "the end for anyone corrupt", while others stood in silence, carrying photos of their loved ones.

The demonstrators gathered in front of Beirut's Palace of Justice angry that more than a year on, no top officials have been held accountable for an explosion that killed more than 200 people, wounded thousands and destroyed large swathes of the capital.

"We are trying the impossible to reach a result in this probe," Joumana Khalifa, whose cousin and friends were killed in the blast, said.

The blast, one of the biggest non-nuclear explosions ever recorded, was caused by a huge quantity of ammonium nitrate that was unsafely stored at the port from 2013.

The probe was frozen on Monday on the basis of a legal complaint by Nohad Machnouk, a lawmaker and former interior minister, whom the lead investigating judge, Tarek Bitar, wants to question on suspicion of negligence.

Machnouk's claim calls Bitar's impartiality into question. Should the court of cassation accept the claim, Bitar will be removed.

Prime Minister Najib Mikati has said he hoped Bitar would continue in his role. The French foreign ministry also said it regretted the suspension of the investigation.

The move followed a smear campaign by Lebanon's political class against Bitar, the second judge to lead the probe after his predecessor was forced out following similar accusations by officials he wanted to question about suspected negligence.

One protester said politicians were acting with impunity.

"I lost my father while he was sitting with us at home," Mohieldin Ladkani said, adding that he and other family members were injured.