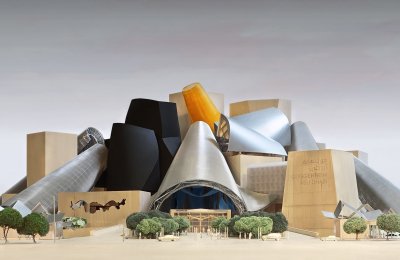 The Department of Culture and Tourism - Abu Dhabi (DCT - Abu Dhabi) has announced that a contract worth $1 billion has been awarded for the development of the Guggenheim Abu Dhabi, a Frank Gehry-designed museum being developed at Saadiyat Island.
The landmark monument, which is coming up on a 30,000-sq-m area, will be the largest instalment in the Solomon R. Guggenheim Foundation’s international group of museums, which includes one in New York designed by Frank Lloyd Wright, at Bilbao designed by Pritzker Prize-winning architect Frank Gehry and the Peggy Guggenheim Collection housed in the Palazzo Venier dei Leoni in Venice.
The contract for the Guggenheim Abu Dhabi has been awarded to a Besix-Trojan joint venture, which is also building the nearby Zayed National Museum scheduled to open in 2023, reported Financial Times.
The development, first announced 15 years ago, has faced delays as well as doubts around its viability through the global financial crisis and a slowdown in government spending in the wake of the crude price collapse in 2014, the report added.
Abu Dhabi has earmarked a total of $6 billion for the cultural and creative industries over the next five years as the oil-rich state seeks to supercharge growth out of the pandemic and to prepare for a post-oil future, stated the FT report.
Guggenheim Abu Dhabi will be the region's pre-eminent museum dedicated to global modern and contemporary art and programming.
The museum will be another addition to the Saadiyat cultural complex on an island off downtown Abu Dhabi, where the Louvre opened a branch in 2017 and the Abrahamic Family House, an interfaith facility comprising a mosque, church and synagogue, is under construction.
It is a part of a larger complex of arts and cultural institutions on Saadiyat Island with its gallery spaces spread across four levels linked by glass bridges, with a central atrium at its core. The project is on track for 2025 completion.
Confirming the project completion date, Mohamed Khalifa Al Mubarak, Chairman of DCT Abu Dhabi, said: "Guggenheim Abu Dhabi advances Abu Dhabi's position as a dynamic centre for arts and culture. The region's pre-eminent museum of global modern and contemporary art, Guggenheim Abu Dhabi will present an equitable platform for art from all over the world."
"The museum will also play a civic role through its mission to spark wider interest in global modern and contemporary art, fostering diversity and inclusion in a meaningful cultural exchange. As we move forward with our plans, it is crucial to recognise the impact of this museum in realising our vision for the Emirate's culture and creative industries," stated Al Mubarak.
Richard Armstrong, Director, Solomon R. Guggenheim Museum and Foundation, said: "Today's announcement represents a significant milestone in the realisation of the Guggenheim Abu Dhabi. Housed in Frank Gehry's distinctive building, the museum will be home to an expansive and evolving collection of artworks that advance multiple perspectives on the global histories of modern and contemporary art, with a particular focus on art from West Asia, North Africa, and South Asia."
Frank Gehry said: "It is truly thrilling to see this project enter into this new phase. I am immensely proud to work closely with our partners, DCT Abu Dhabi and the Solomon R Guggenheim Foundation, to create a home for their ground-breaking cultural programme."
"I hope that this building is embraced by the people of the UAE and that this work will endure as a landmark for the country for many years to come," he added.-TradeArabia News Service