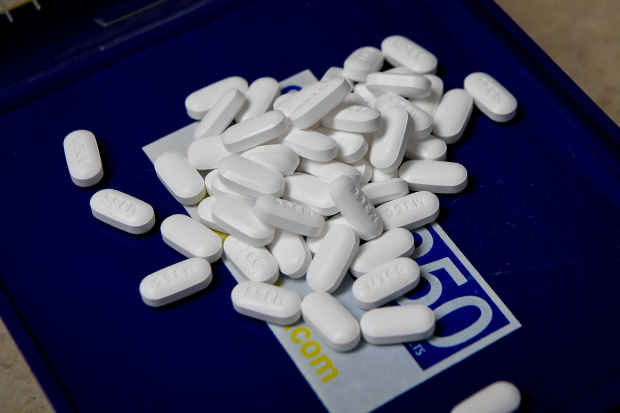 FILE IMAGE: Tablets of the opioid-based Hydrocodone at a pharmacy in Portsmouth, Ohio, June 21, 2017. Reuters Photo

CLEVELAND: Pharmacy operators including CVS Health Corp and Walmart Inc fueled the US opioid epidemic by failing to stop massive quantities of addictive painkillers from reaching the black market, a lawyer for two Ohio counties said at the start of a trial on Monday.

Mark Lanier told a federal jury in Cleveland hearing the first trial the pharmacy chains have faced in nationwide litigation over the epidemic that the companies bore responsibility for drug abuse in the counties of Lake and Trumbull.

"They just dispensed like a vending machine," Lanier said in his opening statement.

He said the four pharmacy operators now on trial, who also include Walgreens Boots Alliance Inc and Giant Eagle Inc, were "the last line of defence" against people obtaining pills to illicitly sell on the streets.

Lanier said the companies did not employ enough pharmacists to do the job right, failed to identify "red flags" of misuse and prioritised filling prescriptions quickly while patients shopped at their retail stores.

Kaspar Stoffelmayr, a lawyer for Walgreens, countered that others were to blame for the surge in pain pills, including doctors who prescribed them and regulators who saw pain as needing vital treatment.

Most instances of opioids being diverted for illicit uses did not involve pharmacies, Stoffelmayr said. He cited a study showing that most prescribed pain pills go unused and sit in medicine cabinets. "A lot of them end up in wrong hands."

Opening statements will continue on Tuesday with arguments from the other companies. They deny wrongdoing, saying criminals were more likely to obtain opioids illegally from other sources, including pill mills, crooked doctors and drug traffickers.

More than 3,300 cases have been brought largely by state and local governments seeking to hold the companies responsible for an opioid abuse epidemic that US government data shows led to nearly 500,000 overdose deaths from 1999 to 2019.

The pharmacy operators have never faced trial before in the litigation.

Should jurors find the companies created a public nuisance, US District Judge Dan Polster will determine how much they must pay to abate, or address, the health crisis in the communities. He has urged the parties to settle.

The trial comes after the three largest US distributors that supply pharmacies - McKesson Corp, Cardinal Health Inc and AmerisourceBergen Corp - and the drugmaker Johnson & Johnson in July proposed paying up to $26 billion to settle cases against them.

A bankruptcy judge in August approved a settlement by OxyContin maker Purdue Pharma LP and its wealthy Sackler family owners that the company values at more than $10 billion.