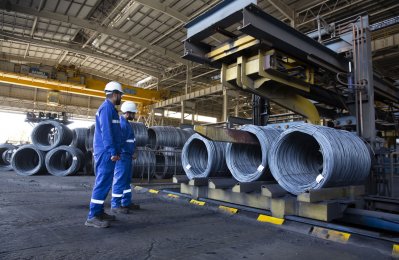 UAE-based Arkan Building Materials Company has announced the legal completion of its merger with  Emirates Steel Industries, following the approval from the shareholders and the Emirati regulator, thus creating a major steel and building materials powerhouse.
Arkan is a major construction and building materials company in the UAE, while Emirates Steel is owned by General Holding Corporation (Senaat), a part of ADQ, one of the region’s largest holding companies.
The merger had been first announced in May this year when ADX-listed Arkan said its board of directors has received an offer to merge the two firms.
Under key terms of the offer, Arkan had issued to Senaat a convertible instrument, which converted into 5.1 billion ordinary shares of the building materials' company.
This Arkan-Emirates Steel combination will result in the creation of a listed national champion in the building materials and construction sector with strong potential for growth in the UAE and internationally, said a statement from the company.
The transaction provides significant revenue diversification for the combined group and marks the first time that investors have access to a steel producer on a UAE public market, it stated.
The new group is well placed to scale and grow, create new business opportunities and ensure that homegrown manufacturers are at the forefront of driving a sustainable, diversified national economy.