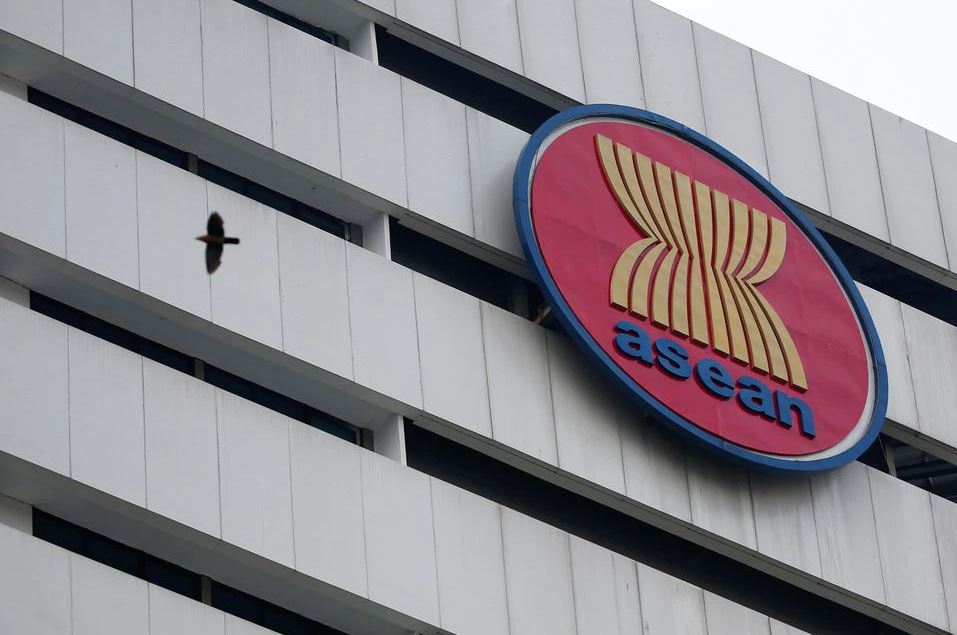 A bird flies near the Association of Southeast Asian Nations (ASEAN) secretariat building, ahead of the ASEAN leaders' meeting in Jakarta, Indonesia, April 23, 2021. REUTERS/Willy Kurniawan

Southeast Asian foreign ministers will discuss excluding Myanmar junta chief Min Aung Hlaing from an upcoming summit at a meeting on Friday,
sources told Reuters, as pressure builds on the ruling military to comply with an agreed peace roadmap.

The meeting comes as the junta ruled out allowing a regional envoy, Brunei's second foreign affairs minister, Erywan Yusof, to meet deposed leader Aung San Suu Kyi, who is on trial on multiple charges since her elected government was overthrown in a Feb. 1 coup.

The Association of Southeast Asian Nations (ASEAN) agreed on a five-point consensus with Min Aung Hlaing in April, but several members of the bloc have criticised the junta's failure to implement the plan, which includes dialogue among all parties, humanitarian access and an end to hostilities.

Friday's previously unscheduled virtual meeting will be hosted by ASEAN chair Brunei, according to multiple sources based in ASEAN member countries, including diplomats and government officials.

Malaysia, Singapore and Indonesia had indicated that they were in favour of excluding Min Aung Hlaing from the Oct. 26-28 virtual summit, but were pushing for a consensus among nine ASEAN states, three of the sources said. Myanmar is the 10th ASEAN member.

A spokesman for Thailand's foreign ministry confirmed a meeting would be held on Friday.

"We can continue keeping them (Myanmar) at a distance but... if we relent in any way, our credibility as a real regional organisation disappears," Locsin said in an interview with Australian think-tank Lowy Institute.

"What's that? We're a bunch of guys who always agree with each other on the worthless things, things that don't count in the world."

The US State Department said Secretary of State Antony Blinken discussed Myanmar, also known as Burma, with Erywan on Wednesday.

It said the two "expressed concern over the violence and deteriorating crisis in Burma and emphasised the urgency for the Burmese military regime to cease the violence, release all those unjustly detained, and restore multi-party democracy and Burma’s democratic transition."

It said they also reaffirmed the need to hold the Myanmar government accountable to the five-point consensus and facilitate a meaningful visit by Erywan "to include engagements with all stakeholders."

A long-planned visit by Erywan to Myanmar has been delayed in recent weeks.

In a statement late Thursday, the junta's foreign ministry said the envoy had proposed a visit this week but requested to meet "some specific individuals", a request the military rejected.

Zaw Min Tin, the junta spokesman, previously said the envoy would not be allowed to meet deposed civilian government leader Aung San Suu Kyi because she is charged with crimes.

Myanmar was willing to allow the envoy to meet people "from legally existing political parties" and "the special envoy should prioritise in this the very first trip to meet with these relevant parties and build trust and confidence between the special envoy and the country concerned," the foreign ministry said.

Erywan last week confirmed that some ASEAN members had been "deep in discussions" about not inviting Min Aung Hlaing. Earlier this week, he said he was in consultations with parties in Myanmar, did not take sides or political positions and looked forward to a visit.

Brunei's foreign ministry did not immediately respond to an emailed request for comment.

Myanmar, with a long history of military dictatorship and international sanctions over systematic human rights abuses, has been ASEAN's trickiest issue since the group was formed in 1967, testing the limits of its unity and policy of non-interference in each others' affairs.

More than 1,100 people have been killed since Myanmar's coup, according to the United Nations, many during a crackdown by security forces on pro-democracy strikes and protests, during which thousands have been arrested.