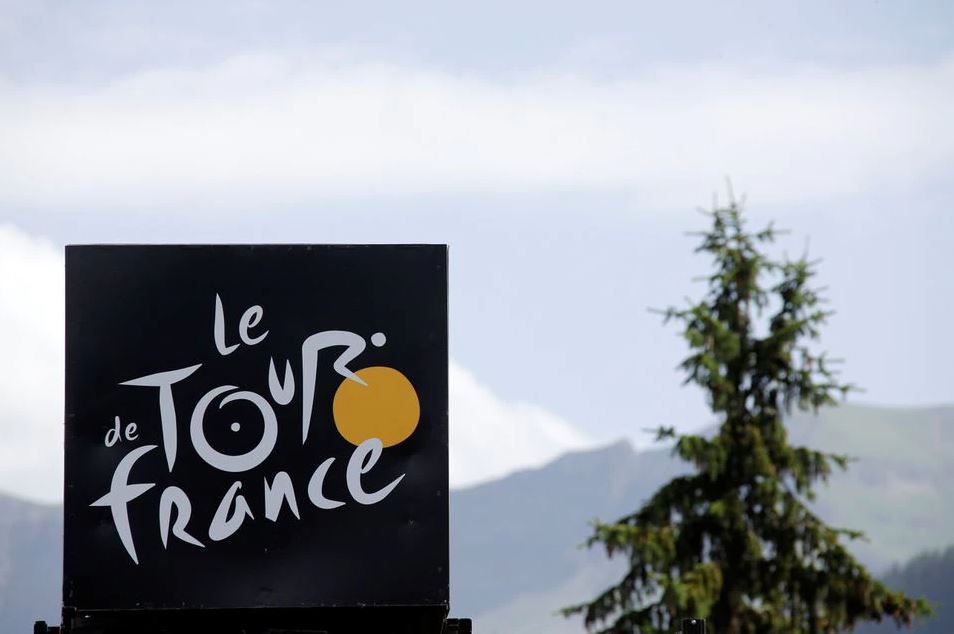 The Tour de France logo is seen near the finish line during a mountain stage. REUTERS/Jean-Paul Pelissier/File Photo

Prosecutors in the trial of a roadside spectator who caused a huge crash on the first stage of the Tour de France in June called on Thursday for a four-month suspended jail sentence, a lawyer for the riders' union said.

The French woman, who has not been named, sent one cyclist tumbling to the ground, with dozens more falling as they rode into him, in a scene that grabbed global headlines.

The woman, who turned herself in some days later, had been holding up a cardboard sign towards a television camera, while facing away from the oncoming cyclists.

The court will rule on the case on Dec. 9, lawyer Romuald Palao, who represents the Professional Cyclists' Association (CPA), which is party to the trial, told reporters after a hearing in the French city of Brest.

"What we want from this trial is that it helps ensure this does not happen again. Cycling is dangerous enough in itself, no need for additional risks," Palao said. "People on the side of the road must act responsibly."

He said the riders' union would not hesitate to file more lawsuits if such incidents were to happen again, adding that spectators taking selfies or posing for pictures or videos needed to be wary of the cyclists' safety.

The woman, whom prosecutors earlier said felt ashamed of what she had done, told the court on Thursday that holding the sign up was a mistake and that she regretted it, a Reuters reporter at the trial said.

She is accused of involuntarily causing injury and putting the life of others at risk.

A lawyer for the defendant declined to comment on the trial.

The Tour de France withdrew its own lawsuit in July, saying that while the safety of the race was key, the case had been blown out of proportion after it triggered a media frenzy.

Tour de France organisers on Thursday announced the route of the 2022 edition of the race.