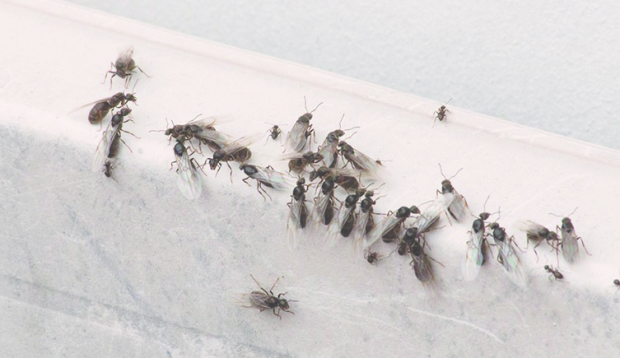 There’s an army in our study, complete with a full air-borne division, and they seem very attracted to cricket. This is not the ‘Barmy Army’, the famous travelling supporters of the English cricket team; this is a home-ground, Bahraini battalion of six-legged invaders. The ants have arrived, and they are swarming over my husband’s cricket pictures.

I am normally in awe of ants. They are focused on very important and mysterious jobs, and their weight-lifting ability puts human Olympians to shame. They are impressively organised, maybe because their communities are headed up by females. This sounds like a good plan for the world.

As a child, I was mesmerised by flying ant day, which always seemed to arrive during a particularly lovely spell of warm weather, and I was a bit disappointed to learn that ants take to the wing over several days rather than just one agreed by the queens of all the colonies as I had imagined. Whether today is designated flying ant day, week or month, the creatures in our study are freaking me out.

Closer inspection reveals that they are flooding out of a hole in the wall. If it was a hole in an outside wall somewhere near the ground, I could imagine that they had perhaps taken a brief detour on the way to their final destination, but this hole is halfway up an internal wall, drilled to hang a picture of an English village cricket pitch. It is like a horror movie. The only positive is that they are little ant-sized ants, rather than the gigantic monsters that patrol the garden.

When we lived here before, we had a beautiful, big ginger cat called Fergus. Fergus was terrified of giant Bahraini ants. Our Hungarian dog is just as scared, and not only of the big ones. We are a family of animal lovers. Our cats and dogs have all been rescues and we try to treat all living things with respect, but this hostile take-over bid can only end one way.

The red can promises not only to kill instantly but to keep on killing. That’s disturbing ... but I’ve seen enough horror movies to know how this ends. It’s us or them.