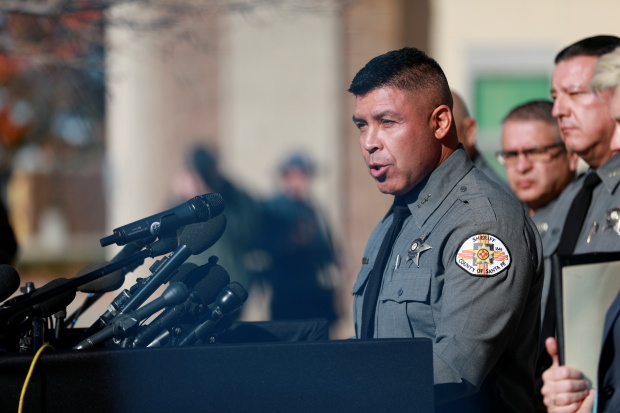 Santa Fe County Sheriff Adan Mendoza and District Attorney Mary Carmack-Altwies told a news conference that while no charges have been filed, they are not ruling out that possibility in the shooting last Thursday that killed cinematographer Halyna Hutchins during a rehearsal.

Mendoza said that authorities have collected 600 pieces of evidence including three firearms, 500 rounds of ammunition and several pieces of clothing and accessories in the ongoing investigation, with some evidence being sent to an FBI crime lab in Virginia for analysis.

“All options are on the table. ... No one has been ruled out at this point,” Carmack-Altwies said referring to potential criminal charges.

Authorities have the firearm used in the shooting, Mendoza said, and have recovered the bullet from the shoulder of director Joel Souza, who was wounded but later released from the hospital. Mendoza said it appears the same bullet struck Souza and Hutchins.

Mendoza said “possible additional live rounds” were recovered from the set and would be tested by ballistics experts. The ammunition recovered included blanks, dummy rounds and suspected live rounds, he said.

“It’s a suspected live round that was fired but it did fire from the weapon and it did cause injury. That would lead us to believe it was a live round,” he said.

Authorities had not previously said whether the ammunition was live or dummy bullets or the blank cartridges often used on movie and TV sets.

The sheriff said Baldwin has been co-operative in the investigation.

“He’s obviously the person that fired the weapon,” Mendoza said. “Right now, he is an active part of this investigation.”