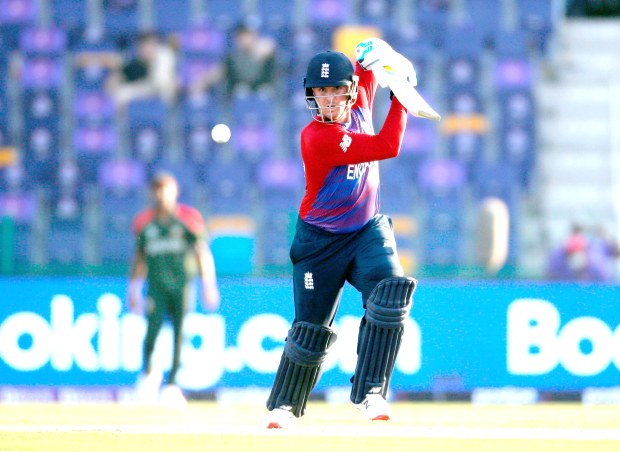 DUBAI: England continued their march towards the semi-finals of the Twenty20 World Cup with their second successive victory, an eight-wicket romp against Bangladesh in a Group I match in Abu Dhabi, yesterday.

Spinner Moeen Ali (2-18) struck in the powerplay and Tymal Mills (3-27) dominated the death-overs to restrict Bangladesh to a below-par 124-9.

Opener Jason Roy smashed 61 off 38 balls as England, bidding to become the first team to hold the 50-overs and 20-overs World Cups at the same time, triumphed with 5.5 overs to spare.

Earlier, Bangladesh won the toss and elected to bat on what their skipper Mahmudullah described as a “belter” at the Sheikh Zayed Cricket Stadium.

Mahmudullah was soon left to rue that decision as England reduced Bangladesh to 27-3 after the six powerplay overs.

Moeen has enjoyed operating with the new ball in recent times and the off-spinner once again was in the thick of things removing both the openers in the third over.

Liton Das offered a top-edge at backward square leg and Mohammad Naim sent the next ball straight to the mid-on fielder and Bangladesh’s powerplay woes were not over yet.

Mushfiqur Rahim made a run-a-ball 29 before trying to reverse-sweep Liam Livingstone and getting trapped lbw in the process.

Bangladesh had to wait until the penultimate over for their first six in their innings when Nasum Ahmed smashed a couple of them against Rashid though they still fell short of the 125-mark.

Later, a stunning opening burst from seamer Ruben Trumpelmann and an unbeaten 32 by JJ Smit down the order helped Namibia secure a nervy four-wicket win over Scotland in their Group I encounter in Abu Dhabi.

Set a modest 110 for victory, Namibia made heavy weather of the chase, losing wickets at key moments on a tricky pitch before Smit and David Wiese (16) did just enough to get them over the line with five balls to spare.