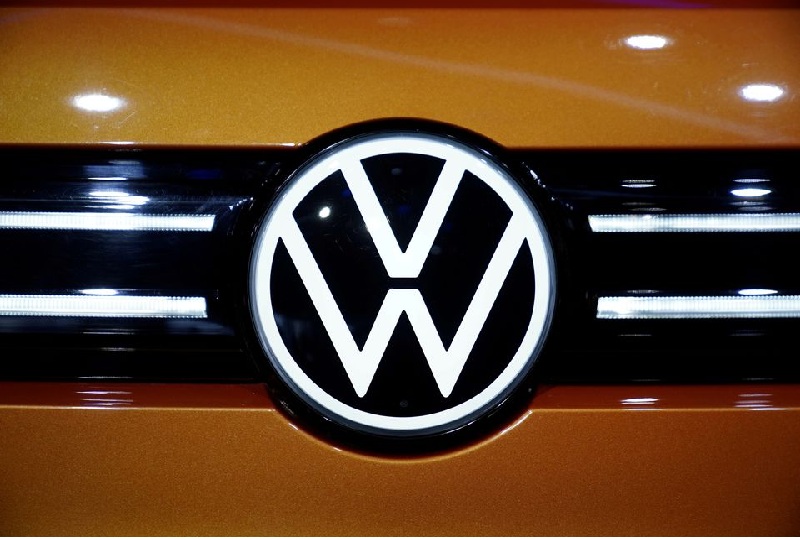 FILE IMAGE: A Volkswagen logo is seen as it launches its ID.6 and ID.6 CROZZ SUV at a world premiere ahead of the Shanghai Auto Show, in Shanghai, China April 18, 2021. (Reuters Photo)

FRANKFURT: Volkswagen cut its outlook for deliveries, toned down sales expectations and warned of job cuts as a shortage of computer chips caused Europe's largest carmaker to report lower-than-expected operating profit for the third quarter.

The earnings showed the pressure that Volkswagen is facing as it tries to switch more of its production to electric vehicles and as Tesla prepares to move on its home territory with a new plant close to Berlin.

At the same time, a lack of automotive semiconductors has plagued the industry for most of the year and also ate into quarterly results of key rivals Stellantis and General Motors.

As a result of the shortage, Volkswagen, which has outlined an ambitious plan to become the world leader in electric vehicle (EV) sales, now expects deliveries in 2021 to be only in line with the previous year, having previously forecast a rise.

"These results underscore once again the need for further productivity improvements and fixed cost reductions in the volume group in order to remain competitive," Chief Executive Herbert Diess told reporters.

Revenues at Europe's largest carmaker are now expected to be considerably higher in 2021. Volkswagen had previously expected a significant increase from the 223 billion euros achieved last year, wording that had indicated stronger growth.

Volkswagen was now assuming sales growth of up to 10% rather than up to 15% previously, Chief Financial Officer Arno Antlitz said.

Shares in the world's second-largest carmaker fell as much as 4% to the bottom of Germany's blue-chip index.

Volkswagen, which aims to overtake Tesla as the world's largest seller of EVs by the middle of the decade, confirmed its operating profit margin target of 6.0-7.5% for 2021.

Diess on Thursday said he was confident that Volkswagen could keep up with Tesla, but added this would require further cost cuts, including headcount reductions at its Wolfsburg headquarters in western Germany.

"For sure we need some headcount reduction, to be as competitive," Diess said.

Tesla is planning to open a plant in Gruenheide near Berlin, its first gigafactory in Europe, this year although no final approval has been given by authorities.

Diess said the Tesla site was setting a new benchmark in terms of productivity, speed and lean management.

Third-quarter operating profit came in at 2.8 billion euros ($3.25 billion), down 12% versus last year and lower than the 2.99 billion Refinitiv forecast. The profit margin for the July-September period fell to 4.9% from 5.4% last year.

"The results of the third quarter show once again that we must now systematically drive forward the improvement in productivity in the volume sector," Diess said.

Volkswagen's luxury division Porsche AG, which sources have said is being evaluated for a possible stock market listing, separately said the fourth-quarter would be challenging with regard to chip supply.

Asked about a possible listing, Diess said there were no plans currently for further asset sales following the initial public offering of trucks unit Traton and plans to bring in investors to fund six battery factories by 2030.