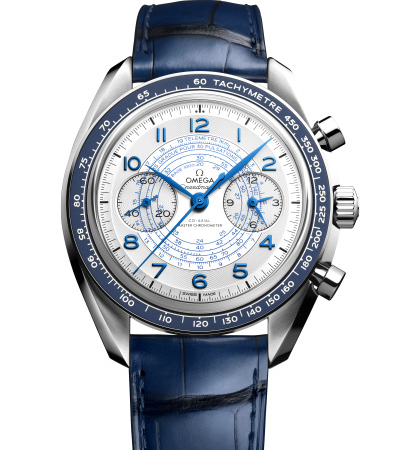 OMEGA’S Speedmaster Chronoscope accurately determines the duration of a phenomenon, telling the wearer how fast they are going, based on how fast they have travelled.

Omega’s new 43mm Chronoscope performs this function beautifully on multiple levels and has plenty of unique details to enjoy.

Most prominently, the Chronoscope’s captivating dials are printed with three timing scales.

Today’s Chronoscope models pay tribute to Omega’s past, with dials in the detailed ‘snail’ design that featured on the brand’s chronograph wristwatches from the 1940s.

The 20th century also makes its mark on the leaf-shaped hands of each watch, as well as the ‘spiral’ track pattern that elegantly runs beneath the Arabic numerals on the dial.

Visible through the sapphire crystal on the caseback is a manual-winding Omega Co-Axial Master Chronometer Calibre 9908 with a beautiful finish.

A standout feature is the design of the Chronoscope bridge – Geneva waves in arabesque, that start from the balance wheel instead of the centre of the movement – a first for Omega.

As a certified Master Chronometer, both the movement and the watch have proven their worth under the toughest conditions, having emerged from the industry’s strictest tests, set by the Swiss Federal Institute of Metrology (METAS).

The new collection offers leather straps in blue, brown, or in black – which has micro perforations revealing a red rubber interior.

For wearers who prefer an overall metallic look, there are polished-brushed steel bracelets with Omega’s patented comfort release system, adjustable to two positions – 21mm between the lugs – 16mm on the buckle.

Additionally, one of the models is crafted in Omega’s exclusive bronze gold, with an oxidised bronze dial featuring a special patina and opaline finish.

Along with a polished brown ceramic bezel ring with its tachymetre scale in ‘vintage’ enamel, the leaf-shaped hands and Arabic numerals also feature an 18K Bronze Gold PVD coating.