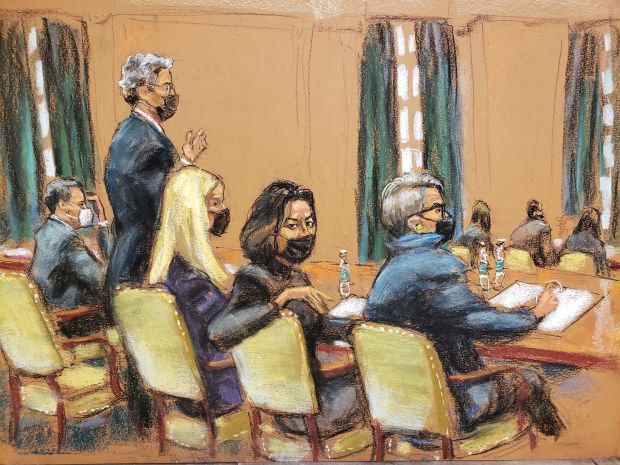 NEW YORK: British socialite Ghislaine Maxwell's defence in her sex abuse trial will focus on undermining her accusers and distancing her from Jeffrey Epstein, the financier for whom she is charged with recruiting underage girls, according to legal experts and court filings.

In what is viewed by some legal experts as a risky strategy in the post-#MeToo era, Maxwell's lawyers will question the credibility of four women who say she groomed them as teenagers for Epstein to abuse from the 1990s to the early 2000s, arguing that their memories are faulty or that they are lying because of financial incentives. They have said in a court filing that one woman was motivated by a "desire for cash."

Epstein died by suicide at 66 in a Manhattan jail cell in 2019 while awaiting trial on sex abuse charges.

"[Maxwell's lawyers] want to say the real villain is no longer around to be prosecuted, so they're using her as a scapegoat," said Laurie Levenson, a professor at Loyola Law School in Los Angeles.

Maxwell has pleaded not guilty to eight charges including sex trafficking.

Her lawyers have argued that prosecutors, unable to convict Epstein because of his death, are seeking to "substitute" Maxwell in order to hold someone responsible.

"Left with no fish to attempt to fry, the government belatedly turned to Ms. Maxwell," her lawyers wrote in a Feb. 4 filing.

The office of US Attorney Damian Williams in Manhattan, which is prosecuting the case against Maxwell, declined to comment. Maxwell's lawyers did not respond to requests for comment.

Jeffrey Pagliuca, a lawyer for Maxwell, said at a Nov. 10 hearing that the defense would question the women who say they were abused about why they waited so many years to come forward.

Two of the women - Annie Farmer and another who will testify under a pseudonym - did not accuse Maxwell of wrongdoing until long after Epstein's alleged abuses, according to Maxwell's defense.

A diary Farmer kept in the 1990s describing interactions with Epstein did not mention Maxwell, and the unidentified witness said nothing about Maxwell until June when prosecutors showed her a photograph, the lawyers said.

The defense will in part rely on the expert testimony of Elizabeth Loftus, a psychologist who studies how memories can become distorted over time.

There are risks for the defense team, some lawyers said, particularly since the #MeToo movement in which women accused powerful men of sexual harassment and abuse.

"Victim shaming ... doesn't work especially now in 2021, and it usually hurts you," said Zachary Margulis-Ohnuma, a New York defense attorney who specialises in sex crimes cases. "You have to show the utmost empathy in my opinion to people who have been victimised."

Maxwell's defense also has indicated that they intend to argue the women are belatedly accusing Maxwell because of the possibility of a payout.

All four accusers have accepted payment from a victims' compensation fund established by Epstein's estate, Maxwell's attorneys said in a court filing.

"The motive for fabrication could not be clearer," Laura Menninger, another Maxwell lawyer, wrote in connection with a civil lawsuit Farmer filed against Epstein's estate. Farmer dropped that case when she sought compensation from the victims' fund.

"Her newly asserted memories of abuse - without corroboration - are not based on the truth or a desire for 'justice' so much as her desire for cash."

Lawyers for Farmer did not reply to a request for comment.

Legal experts said that the prosecution would not have brought the case unless they had believed the women could withstand attacks on their credibility.

"I don't think they go after her unless they have these women able to really put her in the crosshairs, and to situate her at the center of this," said Deborah Tuerkheimer, a professor at Northwestern University's Pritzker School of Law in Chicago.