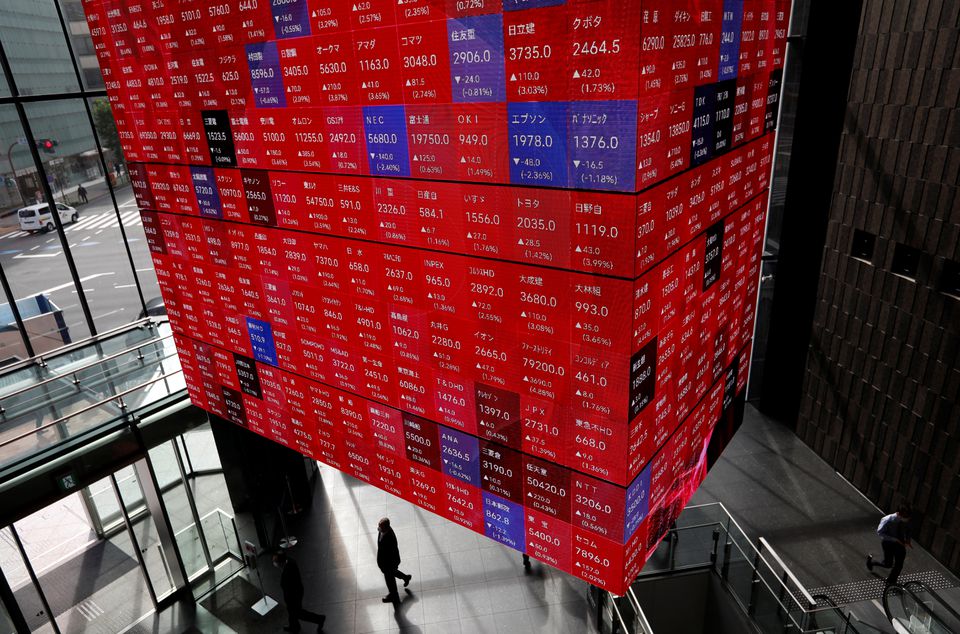 An electronic stock quotation board is displayed inside a conference hall in Tokyo, Japan November 1, 2021. REUTERS/Issei Kato

A tech shares bounce carried European equities higher on Thursday, following similar gains on Wall Street and Asia and helped also by a small pullback in the dollar from a 17-month high.

With U.S. markets closed for Thanksgiving, focus was trained on Europe where a surge in COVID-19 cases is raising the prospect of lockdowns going into the Christmas shopping season.

Those concerns had knocked the pan-European STOXX 600 index to a three-week low on Wednesday, but it was up almost half a per cent early on as a 1% tech sector gain offset the eighth straight fall in travel and leisure stocks.

"We continue to treat every sell-off as the buy-the-dip opportunity," said Marija Veitmane, global markets strategist at State Street Global Markets, adding that firms' earnings were still robust and that borrowing costs were still very low.

In the bond markets there was a small dip in German bund yields after Social Democrat and former finance minister Olaf Scholz struck a three-way coalition deal on Wednesday that will see him replace Angela Merkel at the helm of Europe's largest economy.

It was the first dip in borrowing costs in three days. They have risen sharply this week as traders have ramped up bets that rising inflation will see the European Central Bank join the U.S. Federal Reserve in hiking interest rates next year.

"The inflation debate, whether is it temporary or not, is still there," said Dirk Schmacher, Head of European Macro Research at Natixis.
He also flagged the renewed lockdown in Austria and the fast rising case numbers in parts of Germany.

Emerging markets saw some relative calm after a turbulent few days that has seen Turkey's lira battered again, Russia and Ukraine tensions rise, and Mexico's president stoke worries about central bank independence by installing a virtual unknown at the helm.

Russia's rouble moved away from recent four-month lows, back above 75 per dollar, while South Africa's rand recovered from a one-year trough.

In Asia, the tech recovery that had kicked off on the Nasdaq on Wednesday, lifted Japan's Nikkei 0.8% and saw Hong Kong's tech index snap six sessions of losses, with Alibaba among the main winners.

Other share moves were more muted however. MSCI's broadest index of Asia-Pacific shares outside Japan traded either side of flat all day, and was last 0.04% higher.

In broad terms, "when it comes to regional equities allocation, we're watching the U.S. dollar which is making new highs and that is a headwind for emerging market equities," said Fook-Hien Yap, senior investment strategist at Standard Chartered Bank wealth management.

The dollar is trading near its highest in almost five years versus the Japanese currency at 115.3 yen, and consolidating a near 18-month high against the euro which was a fraction higher at $1.1222. FRX

Several U.S. Federal Reserve policymakers have said in recent days that they would be open to speeding up the tapering of the central bank's bond-buying programme if the high rate of inflation held, and move more quickly to raise interest rates, minutes of the Fed's Nov. 2-3 policy meeting showed.

"The market is now pricing in more than two hikes next year, but we think that is overly aggressive. We are only looking for about one hike next year," said Yap.

These expectations have pushed U.S. treasury yields higher, albeit inconsistently, with benchmark 10-year notes last yielding 1.6427% having risen as high as 1.6930% on Wednesday.

U.S. Treasuries will not trade on Thursday because of the Thanksgiving holiday. U.S. stock markets will also be closed and will have a shortened session on Friday.

In other central bank news, the Bank of Korea raised its policy interest rate by 25 basis points on Thursday, as widely expected, as concern about rising household debt and inflation offset uncertainty around a resurgence in COVID-19 cases.

Oil prices see-sawed meanwhile after a turbulent few days in which the United States said it would release millions of barrels of oil from strategic reserves in coordination with China, India, South Korea, Japan and Britain to try to cool oil prices after calls to OPEC+ to pump more went unheeded. However, investors questioned the programme's effectiveness, leading to price gains.