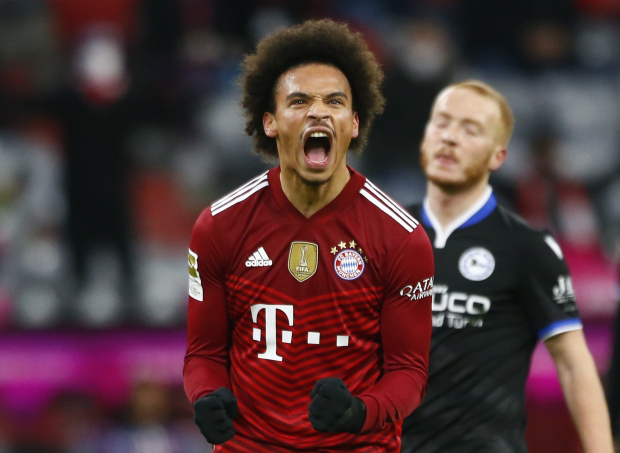 MUNICH: Leroy Sane's second-half goal gave misfiring Bayern Munich a 1-0 victory over visitors Arminia Bielefeld on Saturday to keep the champions top of the Bundesliga, a point ahead of Borussia Dortmund.

Sane broke the deadlock in the 71st minute with a powerful drive after the Bavarians had squandered a bagful of chances, to lift his team to 31 points from 13 games, with next week's opponents Dortmund on 30 after beating VfL Wolfsburg 3-1 nL1N2SI09V away.

"For me it is always about staying in there," said Bayern's Thomas Mueller, whose 396th Bundesliga appearance for the club saw him go level with Bayern great Franz Beckenbauer.

"In such a game a lot of things might not work out but we have a lot of players who are good in their finish. So it is all about trying and trying and at some point you will score," he said.

Following a turbulent few days for Bayern, with last week's Bundesliga loss to Augsburg and a string of positive COVID-19 cases among their players, the side were desperate to reclaim top spot from Dortmund, who had won earlier on Saturday.

The Bavarians also had to endure a tumultuous annual general meeting on Thursday with some club members vocally opposing the ongoing sponsorship deal with Qatar Airways because of the country's human rights record.

The hosts were frustrated throughout a dominant first half by Arminia goalkeeper Stefan Ortega, whose series of superb saves kept the visitors in the game.

After the break the Bavarians picked up where they left off and had two early golden chances through Sane and Thomas Mueller.

Sane had another good opportunity in the 57th with a volley that sailed just wide and Corentin Tolisso's glancing header also missed the mark a little later.

Germany international Sane, however, did not miss in the 71st, rifling in from outside the box from a Mueller pass.

Substitute Serge Gnabry rattled the bar minutes later but it was Sane's goal that meant Bayern set a league record with 102 Bundesliga goals in a calendar year, beating Cologne's mark from 1977.