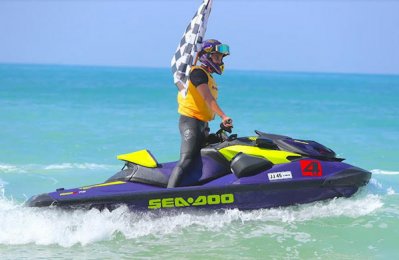 The Ajman Department of Tourism Development concluded the Ajman Sea Festival 2021 at the Ajman Corniche and Al Zorah - Marina 1, and attended by huge audience of marine sports enthusiasts.

The event was organized by the Abu Dhabi International Marine Sports Club in association with the UAE Marine Sports Federation on November 26 and 27.

This year’s competitions of the Ajman Sea Festival, considered the most dynamic challenge for jet ski racers as it requires a high level of fitness and specialized equipment, attracted a large number of participants who were actively competing to be crowned as winners.

The festival witnessed the coronation of Sheikh Abdulaziz bin Humaid Al Nuaimi as the winner in the ”Veterans Category” of the Emirates Jet Ski Marathon – Ajman Ride, and Ahmed Rashid Dawaas in the second place, and Younes Al Awadi in the third place.