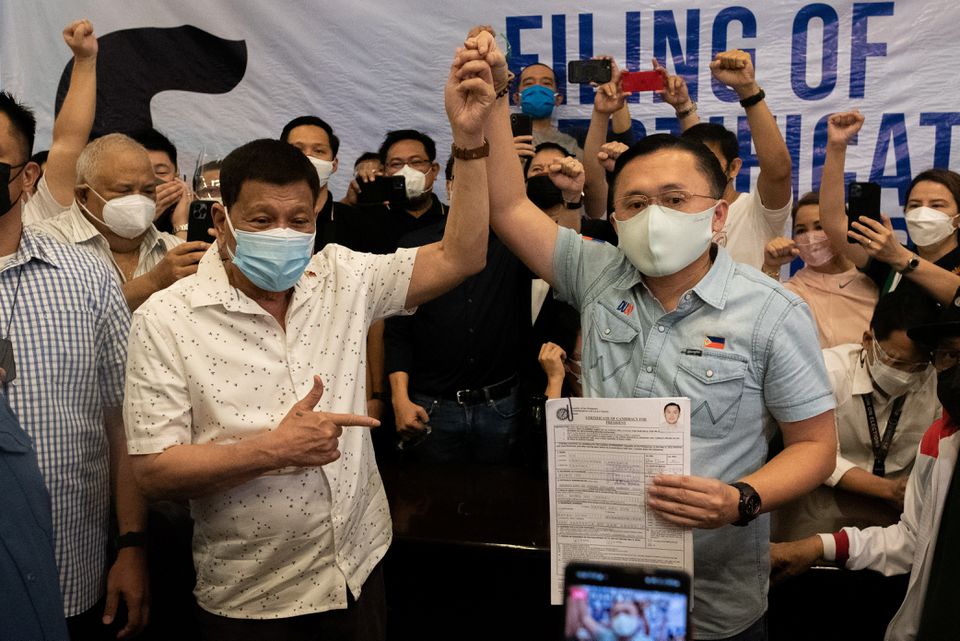 Philippine President Rodrigo Duterte raises the hand of Philippine Senator Christopher "Bong" Go after filing his certificate of candidacy for president for the 2022 national election, at the Commission on Elections, in Manila, Philippines, November 13, 2021. REUTERS/Lisa Marie David/File Photo

Philippine Senator Christopher "Bong" Go, the preferred successor of Rodrigo Duterte, said on Tuesday he was withdrawing his candidacy for presidency.

Go, President Duterte's long-time aide, had recently hinted he may drop out of the race and his withdrawal leaves the administration without a presidential candidate. It was not clear yet who Duterte will now support.

"I and President Duterte are ready to support whoever will truly serve and can continue and protect Duterte's legacy towards a more comfortable and safe and prosperous life for our children," Go said in a short speech streamed on Facebook.

Go said he was making the "supreme sacrifice for the good of the country and for the sake of unity among our supporters and leaders."

Duterte's daughter, Davao Mayor Sara Duterte-Carpio is running for the deputy post alongside the son of late Philippine dictator and namesake, Ferdinand Marcos Jr., who has emerged as an early frontrunner.

The Southeast Asian nation of 110 million people holds elections in May 2022 for positions from president down to governors, mayors and local officials.

Duterte, 76, is barred by the constitution from seeking re-election but he will run for a seat in the senate next year.