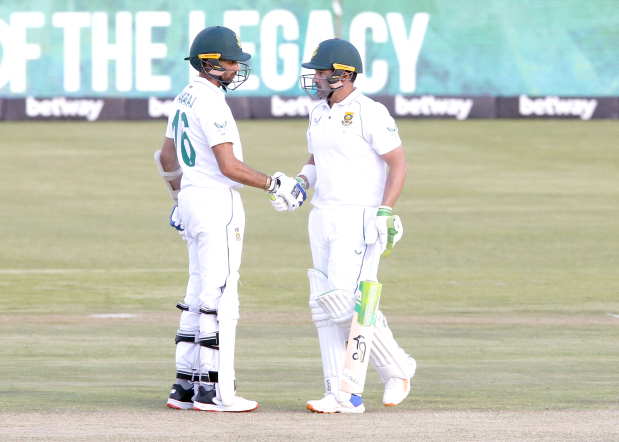 PRETORIA: South Africa captain Dean Elgar scored an unbeaten 52 against India as the hosts showed a dogged determination to stay in the fight on a spicy wicket and closed the fourth day on 94 for four in the first Test at Centurion Park yesterday.

South Africa are still 211 runs off their record victory target at the venue of 305 on a wicket that is treacherous for the batsmen with sideways movement, but also variable bounce.

Some deliveries are staying low and others spitting off the surface with exaggerated bounce.

They will need to negotiate the skilful India attack on the final day as the tourists attempt to secure a victory on the way to a hoped for first ever series win in South Africa with Tests in Johannesburg and Cape Town to follow.

South Africa lost Aiden Markram (one), Keegan Petersen (17), nightwatchman Keshav Maharaj (eight) and Rassie van der Dussen, who showed great patience for his 11 from 65 balls before he was bowled by Jasprit Bumrah (2-22) with a superb in-swinger while not offering a shot.

The highest fourth innings score to win at Centurion Park is 251 for eight by England in 2000, an infamous Test where both teams agreed to forfeit an innings after rain to force a result.

The next best successful chase is 226 for four by South Africa against Pakistan in 1998.

India were earlier bowled out for 174 in their second innings, the South African seamers expertly using the conditions with Kagiso Rabada (4-42) and 21-year-old left-arm debutant Marco Jansen (4-55) the chief wicket takers.

None of the tourists’ batsmen were able to get settled at the crease with Rishabh Pant (34) the top scorer as he tried to take the attack to the bowlers.

There was more disappointment for India captain Virat Kohli (18) as he chased a wide delivery for the second time in the Test and was caught by wicketkeeper Quinton de Kock off the bowling of Jansen.