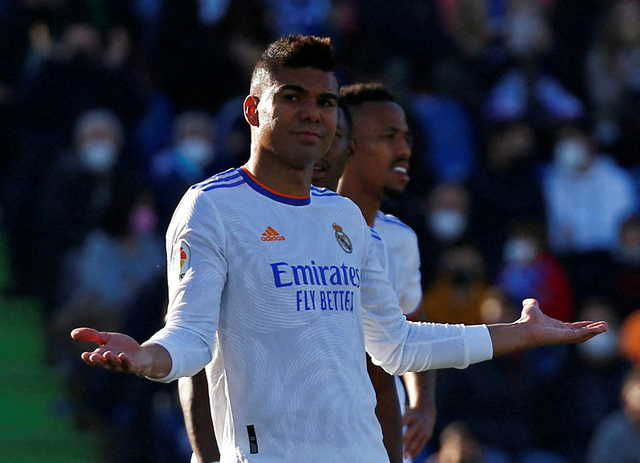 MADRID - LaLiga leaders Real Madrid will host Valencia on Saturday as they try to rebound from a disappointing 1-0 loss to Getafe last weekend when coach Carlo Ancelotti slammed his players after a sluggish performance.

They will face a much improved Valencia side, whose coach Jose Bordalas Jimenez has received much praise after they went undefeated in LaLiga from late October until they suffered a 2-1 home loss to Espanyol in their last league outing.

“Our team took a few more days of vacation after Christmas,” an angry Ancelotti said after Real's loss at Getafe, adding that what he saw "was not the same team" that managed to build a comfortable lead at the top in the weeks prior to the winter break.

Real were flat again as they rode their luck to edge past Alcoyano in the last 32 of the Copa del Rey on Wednesday, winning 3-1 with two late goals that helped them gain revenge for their defeat to the third-tier side last year.

Real are still league leaders with 46 points from 20 games, but second-placed Sevilla are now only five points behind and have a game in hand.

As Getafe snapped Real's 15-match unbeaten streak, it brought back memories of the 2014-15 season, when -- with Ancelotti as their coach -- Real's 22-match winning run was ended by Valencia in January.

That year, Barcelona, who struggled at the start of the season, stormed back to capture the treble of LaLiga, Copa del Rey and Champions League titles.

The Catalans are currently a long way off top, in fifth and 15 points below Real.

Yet they managed to climb into the European spots last weekend for the first time since Xavi Hernandez replaced Ronald Koeman as coach in November with a 1-0 win at Mallorca, when they where missing 14 players due to Covid-19, injuries and suspensions.

Barca will stay in Andalusia, where they beat third-tier Linares 2-1 in the Copa del Rey on Wednesday, and will face Granada, who are unbeaten in LaLiga since late November.

Sevilla will try to maintain their momentum at home on Sunday against Getafe, who are led by former Watford manager Quique Sanchez Flores.

With their win in the derby against Real Madrid, they extended their unbeaten streak in LaLiga to six matches and are 16th in the standings, two points above the relegation zone.

Champions Atletico ended a run of four consecutive league losses with a 2-0 home win against Rayo Vallecano thanks to a brace from Angel Correa.

They will travel down south to face in-form Villarreal, who are on a four-game winning run under former Paris St Germain and Arsenal manager Unai Emery.