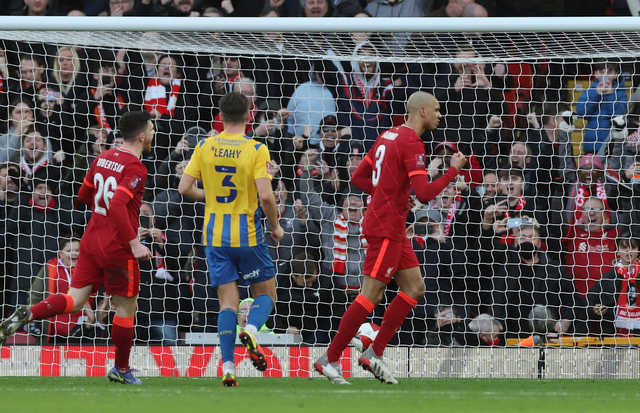 Liverpool and Tottenham Hotspur were given scares before eventually beating lower-league sides in the third round of the FA Cup on Sunday, while West Ham United ousted Leeds United in an all-Premier League clash.

Liverpool came from a goal down to win 4-1 against third-tier Shrewsbury Town, while Tottenham left it late before fighting back and then pulling away to beat Morecambe 3-1, with a battling display in the second half.

David Moyes' West Ham won 2-0 against Leeds, who were without 10 first-team players including striker Patrick Bamford.

Liverpool midfielder Fabinho scored twice, including a first-half penalty, while Kaide Gordon and Roberto Firmino also got on the score sheet for the Merseyside club at Anfield.

"When you get the first goal against you, so many things can happen but I liked the way we responded," manager Juergen Klopp, who returned to the touchline after his recovery from Covid-19, told the BBC.

Shrewsbury's Daniel Udoh put the visitors ahead in the 27th minute after he slid in Nathanael Ogbeta's cross to score from close range, but Liverpool winger Gordon found the equaliser seven minutes later with a calm finish.

Brazil international Fabinho scored a penalty before halftime, sending Shrewsbury keeper Marko Marosi the wrong way, before Firmino added the third in the 78th minute with a brilliant back-heel effort from close range.

Fabinho doubled his tally in the 93rd minute, blasting the ball into the roof of the net from a tight angle.

Tottenham's Harry Kane and Lucas Moura scored late to complete a comeback for Antonio Conte's team, who were greeted with a huge chorus of boos from fans after a disappointing first-half performance.

Morecambe, who are battling relegation in League One, stunned their Premier League opponents after Anthony O'Connor scored in the 33rd minute.

Tottenham paid the price for sloppy defending when O'Connor side-footed a volley into the net from Morecambe's first corner of the game.

After a string of chances, Tottenham finally levelled in the 74th minute through Harry Winks when he swung in a direct free-kick from the left touchline.

The hosts hit the front nine minutes later when Moura rounded keeper Trevor Carson after striding into the box before Kane wrapped up the win after being smartly picked out by Giovani Lo Celso.

"For sure we struggled a lot in the first part of the game and conceded a goal from the set-piece," said Conte.

"We deserve to win because in these type of games you have to show your strength. They defended with 11 players and that's normal in these games, but it is important to find the right solution."

Wolverhampton Wanderers won 3-0 against Sheffield United with two goals from Daniel Podence and another from Nelson Semedo, while Norwich City defeated Charlton Athletic 1-0 with a second-half goal from Milot Rashica.

Tottenham's north London rivals Arsenal are due to play away at Nottingham Forest later on Sunday.

Following is the draw for the FA Cup fourth round made on Sunday: