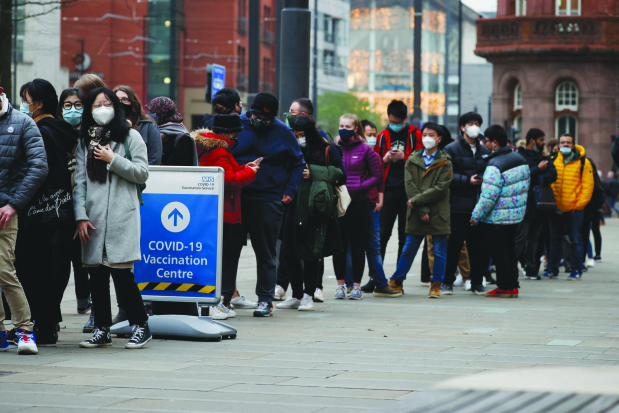 People queue to receive Covid-19 vaccine and booster doses at a vaccination centre in Manchester, Britain

LONDON: Over half of Europe’s population is forecast to get infected with the Omicron variant in the coming weeks, a World Health Organisation official said yesterday.

Hans Kluge, WHO’s regional director for Europe, said that a new “West to East tidal wave” of omicron infections is sweeping across the region on top of Delta infections.

“At this rate, the Institute for Health Metrics and Evaluation forecasts that more than 50 per cent of the population in the region will be infected with Omicron in the next six to eight weeks,” Kluge said during a virtual Press conference.

More than seven million infections across the region were reported in the first week of 2022, more than doubling over a two-week period, according to Kluge.

WHO classifies the overall risk related to Omicron as “very high,” noting in a recent technical report that it has a “significant growth advantage over Delta, leading to rapid spread in the community”.

“The rapid increase in cases will lead to an increase in hospital treatments, may pose overwhelming demands on health care systems and lead to significant morbidity, particularly in vulnerable populations,” the organisation said.

Another WHO official, Catherine Smallwood, warned that Covid-19 is “still a way off” from becoming an endemic. She defined an endemic as “stable circulation of the virus at predictable levels and potentially known and predictable waves of epidemic transmission”.

“But what we’re seeing at the moment coming into 2022 is nowhere near that,” she said. “We still have a huge amount of uncertainty. We still have a virus that’s evolving quite quickly and posing new challenges. So we’re certainly not at the point of being able to call it endemic.”