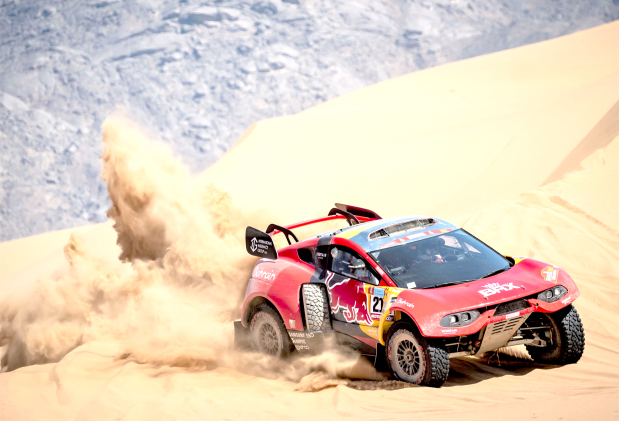 Bahrain Raid Xtreme secured a trio of top ten stage finishes in the Dakar Rally as Nasser Al Attiyah was left to face a tense last day test before securing a fourth triumph in the event.

Sebastien Loeb initially recorded the second fastest time on the 346-km penultimate stage around the south-western town of Bisha as he looked to reinforce his challenge at the wheel of BRX Prodrive Hunter in second place overall.

A five-minute penalty later imposed after he braked late going into a speed control zone dropped the nine-times World Rally Champion Loeb and Fabian Lurquin to eighth on the day, which they ended 33 mins 19 secs adrift of overall leader Al Attiyah.

Despite the penalty for Loeb, the Frenchman ensured that Al Attiyah still needs an untroubled run on today’s final 164 km stage to secure victory in Jeddah where the rally started on January 1.

With two BRX team crews in the top four places, it has been a fantastic start to the life of the Hunter T1+, with all three cars running on next generation advanced sustainable fuel.

Terranova’s performance has been nothing short of exceptional, and the Argentine is on course to take his highest ever Dakar finish, his previous best being a fifth in South America.

He completed yesterday’s stage to say: “For me it was the hardest stage of this year’s Dakar but actually it was very nice to drive. We were stuck in the dust of Peterhansel after he made a mistake 2 kms after the start, but after then it was nice.

“I think the challenge was to keep the time gap to De Villiers who is 13 minutes behind us and in the end we made it. Tomorrow should be less difficult so I think my best result of fourth overall is as good as in our hands, and that’s a wonderful result for Dani and I.”

Loeb said: “Yes that was a good day out there doing what we could to keep our important second place overall for BRX. The car has been strong and quick too, especially on its first event, something the team should be very proud of.”

Roma declared: “It was a great day with a really nice stage that was actually one of the hardest of the rally this year, something that I really liked.”