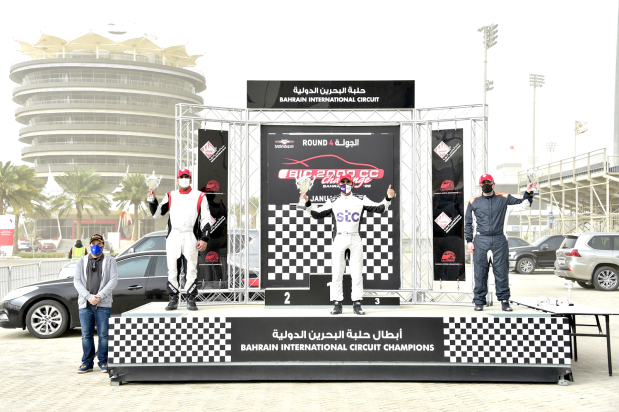 Chief title hopefuls Raed Himmo and Raed Raffii shared the honours in the fourth round of the 2021-22 BIC 2,000cc Challenge, held over the weekend as part of National Race Day at Bahrain International Circuit (BIC) in Sakhir.

Himmo clinched the overall victory in race one where defending champion Raffii took third, and then the pair exchanged positions in the meeting’s second race. Former champion Shaikh Salman bin Isa bin Ebrahim Al Khalifa was the runner-up both times.

All the action was held along BIC’s 2.55-kilometre Inner Track, with the field of racers braving the tough dusty conditions to mark the start of the second half of the 2,000cc season.

Ali Al Mansoori kicked off the day’s events by topping the practice timesheet in his Honda Civic with a fastest lap of one minute 17.080 seconds. Al Mansoori was competing in the series’ Novice class, and he upstaged the higher-tier Pro class competitors, who included the two race winners.

In qualifying, it was Shaikh Salman who secured pole position for the first race with a best time of 1:16.137 driving his Honda Civic. He pipped Himmo, also behind the wheel of a Honda Civic, by just 0.107 seconds.

But in race one, Himmo had the better start as the lights went out and immediately gained the advantage heading into turn one, with Shaikh Salman and Raffii trailing close behind.

All three held on to their positions until the final lap, when the race was red-flagged. Himmo thus secured the win in a time of 12:54.324 on the final classification, while Shaikh Salman followed 1.700s behind. Raffii, driving a Honda S2000, completed the overall and Pro class podium 2.247s back.

Finishing fourth and taking the win in the Novice category, with Moaaz Alzahrawi in a Honda Civic EK and Andrew Ray in a Honda Integra DC2 in second and third in class, respectively. Ray was given a five-second penalty due to moving before the start signal.

With the result, Raed Himmo clinched his fourth race win of the season. He also posted the fastest lap of 1:16.524.

In race two, Majed Himmo started on pole with Ray alongside him on the front row following the championship’s reverse-grid rule.

Raffii, starting from fifth on the grid, rocketed off his position at the lights and quickly charged through the field, passing in between Majed Himmo and Ray and capturing the lead heading into the opening corner.

The leading trio maintained their positions, with Raffii being hotly pursued by Shaikh Salman all the way to the chequered flag. At the end of the 12 laps, only 0.375s separated the pair, with Raffii winning in 15:26.338. Raed Himmo was third 11.454s from first.

Ray finished fourth overall and won in the Novice class, while fifth overall was Majed Himmo with Elzahrawi in sixth to complete the final classification.

Raffii came away with his third victory of the current campaign, while Shaikh Salman registered the race’s fastest lap of 1:16.158.

The winners were honoured at an awarding ceremony attended by officials from BIC, the Bahrain Motor Federation and the Circuit Racing Club.

The BIC 2,000cc Challenge returns for the fifth of the season’s seven rounds on February 25.