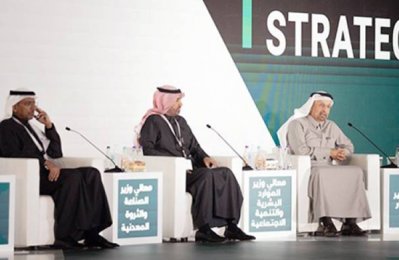 Al-Falih (right) speaks at the event. Image courtesy: Saudi Gazette
Saudi Arabia aims to be an exporter of military products and technologies to other countries, Minister of Investment Khalid Al-Falih has said, according to a Saudi Gazette report.
The report said he was speaking during a panel discussion on the sidelines of the General Authority for Military Industries’ (GAMI) launch of the human capital strategy in the local military industries sector.
Al-Falih said the competitiveness of human resources in the Kingdom is a key element. “The localization rate in the military industries sector is promising and rising,” Al-Falih said. “It is up from 2 percent since the launching of GAMI to over 10 percent now.”
The Kingdom targets a localization rate of 50 percent in the next eight years, which is a great challenge and a big opportunity at the same time, Al-Falih was quoted as saying in the report.