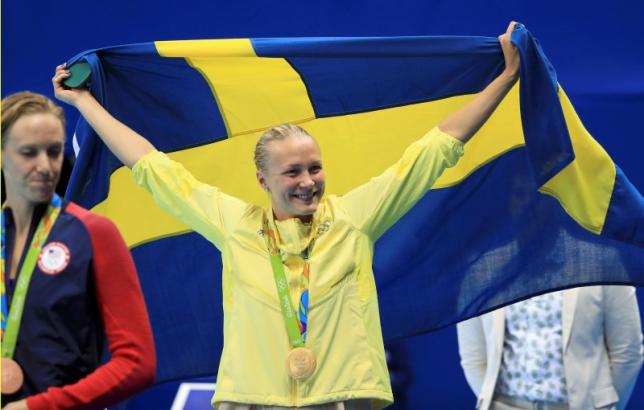 Rio De Janerio: Calming her nerves by reassuring herself that 'it's just a pool', hot favourite Sarah Sjostrom broke her own world record in the 100 meters butterfly on Sunday to become the first Swedish woman to win an Olympic swimming gold medal.

Sjostrom, three times world champion in the event, set a time of 55.48 seconds to break her previous mark of 55.64, set in Russia a year ago. It was the first Olympic medal for the 22-year-old Swede, competing in her third Games.

She will also race in the 50, 100 and 200 meters freestyle, but told reporters she knew the butterfly was her best chance.

"The feeling is totally crazy. I didn't realise it was a world record," Sjostrom said.

"I knew I was the big favourite. I was under pressure, so I tried to focus on no disasters. Before the start I said to myself: 'It's just a pool. It's nothing. I know what to do.'"

The reigning world champion led at the turn and pulled away in the last 50 meters as the crowd cheered her on in anticipation of the record.

Oleksiak put in a strong swim in lane two to snatch the silver ahead of Vollmer, breaking her own world junior record in the process.

"It is super amazing," the Canadian said.

"I still have a few more years left as a junior. Taking that time down is going to be fun."