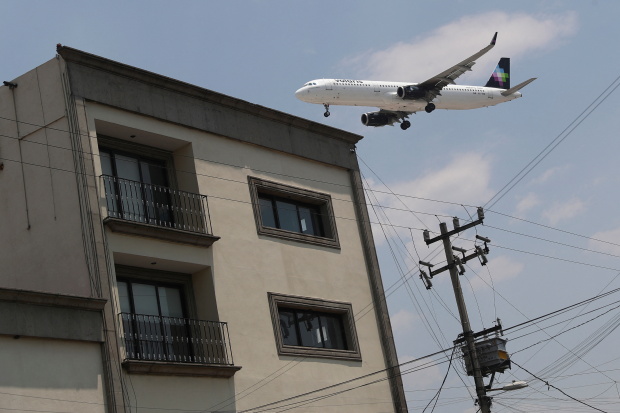 A Volaris airplane prepares to land on the airstrip at Benito Juarez international airport in Mexico City, Mexico, May 9, 2022. Reuters Photo

MEXICO CITY: A Mexican official overseeing an investigation of an incident in which two aircraft nearly crashed on a runway at the country's main airport said on Monday operations at the over-stretched facility would be reduced by 25%.

A video of the Saturday near-miss at Mexico City International Airport showed one plane coming in to land just over another one waiting to take off on the same runway.

"There is this instruction to reduce operations by 25% in 12 months. The airport has been saturated and in terrible condition for decades," Jiminez Pons said in a media interview.

He said to implement the reduction, flights would be diverted to other airports, such as the nearby, newly built Felipe Angeles International Airport.

He said the near-miss at one of Latin America's busiest airports was most likely caused by an air traffic control mistake, noting Mexico has a shortfall of about 250 controllers, which means they work longer hours, but lives had not been in danger.

"The pilots were able to figure it out. We never put people's safety at risk. Yes it was a frightening situation, but the defense of the pilots was put to the test and thank God, these people are prepared."

The video of the incident involving the two jets from Mexican low-cost carrier Volaris surfaced online after an international pilots association cited "several" safety concerns in the capital's airspace.

Volaris shares fell nearly 8% on Monday. On Sunday, the carrier's chief executive, Enrique Beltranena, said on Twitter he had called for internal and external investigations.

"Thanks to the training of our pilots and their impeccable monitoring of the processes, no passenger or crew member was at risk," Beltranena said.

Mexican President Andres Manuel Lopez Obrador called for authorities to "put the airspace in order" and said the director of the Navigation Services in the Mexican Air Space (SENEAM), Victor Hernandez, had resigned.

"We've got to see what factors led to this error, to make sure above all that it doesn't happen again," said Covarruvias, who also welcomed the investigation and Hernandez's resignation. "If it happens again, it's not an accident," he added.

Senator Ricardo Monreal, a prominent member of the ruling MORENA party who has clashed with Lopez Obrador, called on the heads of Mexico's transportation and civil aviation authorities to testify in Congress.

He also called on lawmakers to look into recent troubles at the airport.

"Like thousands of people, I've experienced flight delays, but this week they got worse," Monreal said on Twitter. "The legislative power should take action to understand the causes and support a solution."

The Felipe Angeles International Airport championed by Lopez Obrador and built by the armed forces officially opened in March.

It was intended to relieve the overburdened Mexico City International Airport, but Reuters found that the airport was still under construction almost a month after its inauguration and it offered few daily flights.