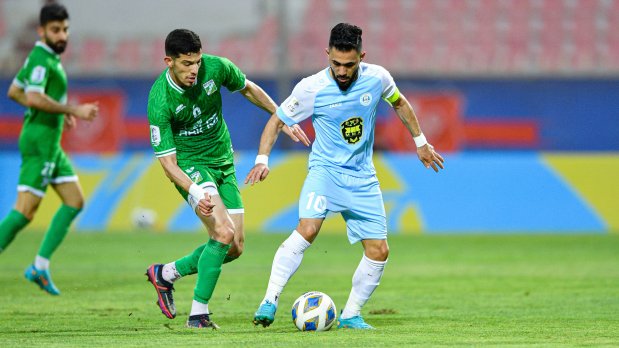 Kuwait City: Al Arabi came from behind to defeat Al Riffa 3-2 in their AFC Cup 2022 opener in Group B of the competition at the Kuwait SC Stadium yesterday.

Al Arabi managed to come back from two goals down to win 3-2 thanks to some exceptional individual skill that culminated in an explosive winning goal towards the end of the match, which was their first in the competition in 13 seasons.

The first 20 minutes saw both sides try to find their feet in possession with the goalkeepers untested although there were some attempts at breaking forward that ended with wayward shots or crosses.

Riffa opened the scoring in the 25th minute when Mohamed Jasim charged down the right flank unopposed and whipped in a flat cross that reached Ali Hasan outside the area, who in turn took a shot that crept under goalkeeper Sulaiman Abdulghafoor as he dived for the save.

The game sprung into life when the Bahraini side scored, provoking a response from the group hosts that saw Saif Al Hashan pounce on a misplaced pass by a defender but not managing a shot on target, while Mohammed Soulah had his close effort saved two minutes later.

Jasim Al Shaikh made it 2-0 in the Manama-based side’s favour thanks to his instinctive tap in from close range, with the assist coming from Hashim Isa on the left flank who floated a cross while under challenge from three players.

At the stroke of half-time, Ante Miše’s men halved the margin through Ali Khalaf who was put through on goal by Ablaye Mbengue and fought off defender Hamad Al Shamsan before slotting in a low shot to make it 2-1.

Khalaf missed a golden chance to equalise seven minutes into the second period of play, after Al Hashan played him through, with the former attempting a tame shot that scraped past the keeper’s post. Minutes later, the duo combined once more with Riffa keeper Abdulkareem Fardan pulling off a double save.

The Kuwaiti side eventually did restore parity a minute short of the hour mark, when Al Hashan took on a ball that was deflected towards him before picking out an onrushing Mbengue who headed past Fardan for his first of the tournament, turning the score 2-2.

Incredibly, Al Arabi completed the turnaround with 16 minutes of play left when Badr Abdulrahman, who came on six minutes before scoring, lathered a shot into the top corner from 30 yards out, taking the opposition keeper by surprise to make it 3-2.