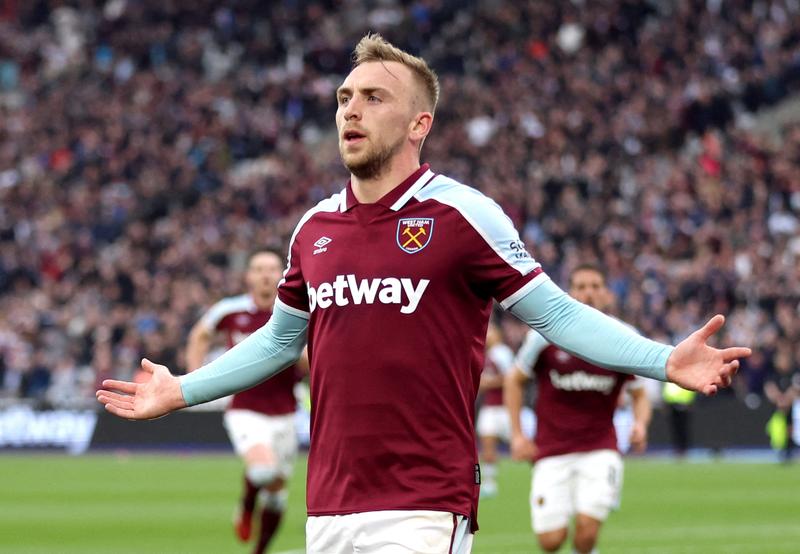 London - England have called up West Ham United's Jarrod Bowen and Leicester City defender James Justin for the first time in manager Gareth Southgate's squad for matches against Hungary, Italy and Germany in the Nations League next month.

Bowen had a fine season for West Ham, finishing the campaign as the club's top scorer with 18 goals in all competitions and helping the club reach the Europa League semi-finals.

"We were certainly thinking about involving him (Bowen) in March before he got injured," Southgate told a news conference at Wembley. "He's a goal threat, he's direct," he added of Bowen who came through the ranks at Hereford United and Hull City.

"His journey is really interesting in terms of experiences he's had. It's a reminder you don't just have to be at an elite academy and come through that pathway. Playing in the lower divisions and to have that experience is a great route to go.

"He works incredibly hard for the team, which we want all our forward players to do. He's thoroughly deserved his call up."

There is also a recall for defender Fikayo Tomori, who has just helped AC Milan win their first Serie A title in 11 years.

In total there are five players included who can play at right back and no natural left backs, although Justin has played in that position for Leicester.

England open their Nations League A Group 3 campaign against Hungary on June 4 in Budapest, behind closed doors due to incidents during Hungary's Euro 2020 games at the Puskas Arena, followed by a trip to Germany three days later.

Southgate's side host Italy on June 11 in a rematch of the Euro 2020 final, which the Italians won on penalties.

That match at Molineux will also be behind closed doors because of crowd trouble before the Euros showpiece in July last year at Wembley. England then welcome Hungary on June 14.

With the World Cup being held in November to December this year, the matches give Southgate a chance to assess who will be in the frame for selection to travel to Qatar for the finals, though he said there was still time for others to come through.

"There's always a possibility that someone emerges before then (the World Cup). There will still be six weeks at the start of the season before the September camp... There's still time, less time to get those experiences but I wouldn't rule that out," he said.

Despite a torrid season for Manchester United, Harry Maguire retains the confidence of Southgate in defence alongside newer faces like Marc Guehi of Crystal Palace and Arsenal's Ben White.

Only one player from the Premier League's top four this season makes it into the midfield of six, with Chelsea's Mason Mount included. However, Conor Gallagher can add to his three caps after impressing on loan at Palace from Chelsea.

The battle to be understudy to main striker Harry Kane will be one to watch as Tammy Abraham gets the chance to stake his claim after scoring 17 goals in Serie A for AS Roma, the most by an English player in Italy's top flight.

Among those to miss out are Everton striker Dominic Calvert-Lewin and Leicester playmaker James Maddison, who scored in each of his last four league games and has just one cap from 2019.

Also omitted is Liverpool captain Jordan Henderson but Southgate said that was due to the midfielder having had a relentless schedule with his club this season which includes Saturday's Champions League final against Real Madrid.

"This is also a chance to see a bit more of some players. The decision around Jordan Henderson, who’s had 60-plus games this season, is going into a Champions League final, and (he) is 32-years-old, I don't need to know any more about him," Southgate added.