An 18-year-old tennis star, hailed by her long-time coach as one of the best young players in Bahrain, is preparing to go to The Netherlands where she hopes to play competitively while studying for a degree in sports management.

Born in Bahrain to Dutch parents – mother Irina, a linguist, and father, Tjeerd, a businessman – Sophie Wilhelmina Beatrix de Boer, who has been playing tennis since she was four and regularly winning tournaments since she was ten, will graduate from the British School of Bahrain (BSB) next month before heading off to her native Holland.

“My focus will be on my studies, obviously,” De Boer told the GDN in an exclusive interview at her coach, Briton Joseph Henrique’s tennis academy in Zallaq. “But I will continue playing tennis competitively. Holland has a very good tennis set-up where there’s intense competition at every level, so, even though I won’t be playing as a professional, it’ll be quite a challenge.”

Henriques, a former professional tennis player who moved to Bahrain in 2010 and set up his academy shortly thereafter, started coaching De Boer when she was ten. She would, he told the GDN, do well in The Netherlands.

“Sophie is so powerful, she moves so well on court, when she hits the ball, she’s nicely balanced and coordinated and she hits with so much power,” he said. “In terms of ability, she’s probably one of the best in Bahrain. So, even though Holland is a very competitive tennis market, she’ll do well.”

He watched De Boer gently hit the ball to ten-year old Bahraini tennis wunderkinds, Sophia Bader and Fatima Al Baajari. Henriques also coaches Sophia and Fatima who recently created history by becoming the first children from the GCC to be selected for the prestigious Smrikva Bowl Tournament which is held annually in Pula, Croatia. 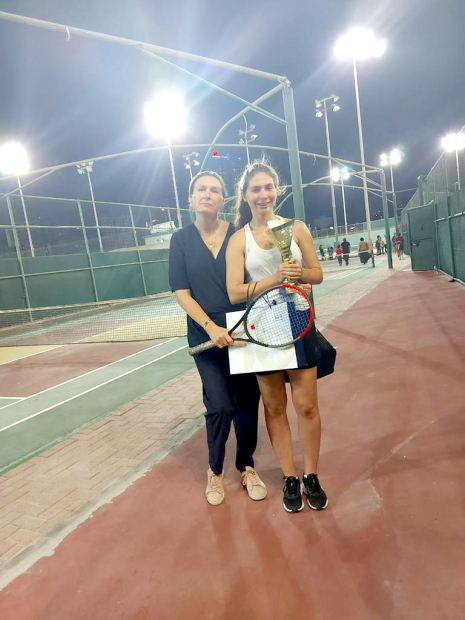 Both the younger girls had greeted De Boer affectionately when they arrived for their training session, hugging the tall teenager and readily following whatever she said as they took turns to warm up.

“I adore Fatima and Sophia,” De Boer said, after rushing to the net to retrieve a lob from Sophia. “I’m their mentor. I want to help them achieve their dream!”

Her own dream would be to play at Wimbledon one day, but De Boer, with a practical head on her shoulders, knows that, if it ever happened, it would be the result of a hard, years-long slog.

“You can’t just go and play Wimbledon,” she explained. “It’s not like a one-stop shop. You have to pass through so many different stages, play so many people, so many matches at different levels. I am nowhere close to that right now. But, if I could be given the choice to play just one Grand Slam tournament in my life, I’d choose Wimbledon. Because it’s the classiest competition in the world.”

It was Fatima’s turn to warm up and the two engaged in a brief rally before a fierce backhand from De Boer screamed past her younger opponent’s racquet.

The Dutch teenager was about to turn ten when she won her first tournament, soon after meeting Henriques, when she captured the Under-10 title at the British Tennis Academy’s Winter Junior Tennis Tournament.

“It was my first tournament triumph, so, of course, it was very special,” De Boer laughed. “But it was also extra special because my opponent was a boy. And I beat him!”

Over the next eight years, under Henriques’ watchful eye, De Boer went from strength to strength – winning singles titles with ease, then triumphing in doubles competitions as well.

By the time she won the 26th BBK Juniors Open Tennis Tournament under-18 girls’ singles title last March, De Boer had won practically every tournament she had played in the kingdom in the preceding few years.

In addition, De Boer has had international experience as well, though not the success she would have liked, having played in Asian Tennis Federation (ATF) events in Sri Lanka and Qatar.

Now, with a new chapter in her young life just around the corner, she’s preparing for university – “My sports management degree will keep me focused on the world of international sport,” she explained – while also remaining quietly confident about her future prospects as a tennis player.

“I’ve won many tournaments, more than most girls, in different age-groups,” De Boer mused. “But, in order to become a professional tennis player, I’d have to commit myself to playing extensively, every single day, for the rest of my life. Success as a professional isn’t just about hard work and determination – it takes a lot of different aspects to make it work.”

Henriques backed up De Boer’s statement by pointing out that the teenager would have to put in the hard yards consistently if she ever wanted to make it as a professional tennis player.

“Right now, she’s had to play – at best – three or four tournaments a year,” he said. “To be in the top grade as a professional, you’d have to play, at least, 90 competitive matches a year. She’ll have to follow the ‘ten-thousand-hour rule’, as the journalist Malcolm Gladwell said. She’ll have to play at least 10,000 hours – two hours a day doesn’t cut it.

“Desire is the other part. Ability is often a gift, but, if you have the desire to succeed, you’re able to, then, give yourself a real chance.”