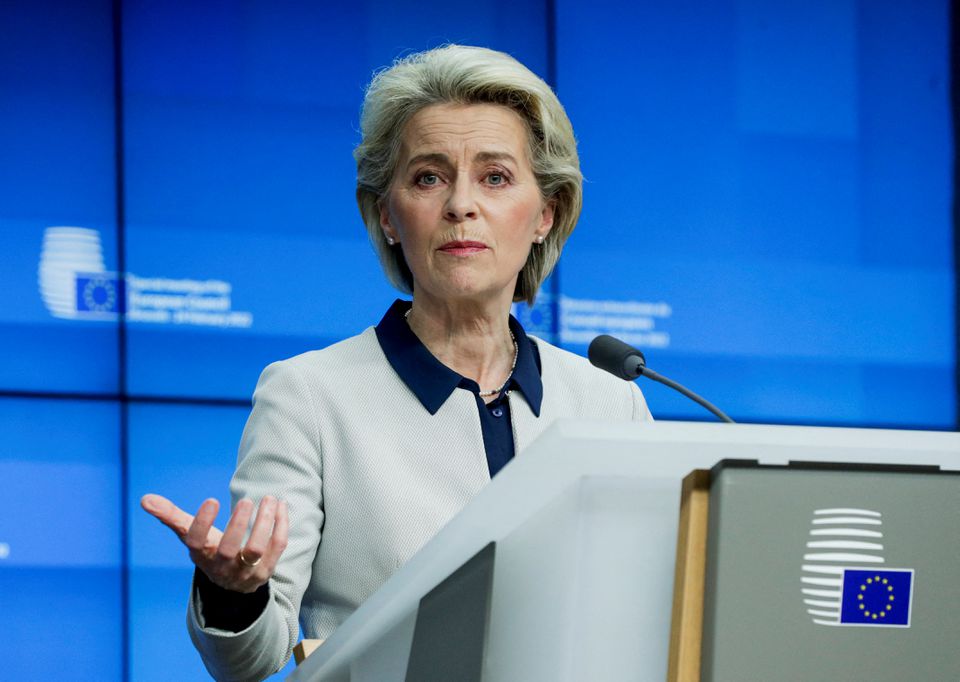 European Commission President Ursula von der Leyen gives a news conference at the end of a special meeting of the European Council in light of Russia's aggression against Ukraine, in Brussels, Belgium, February 25, 2022. Olivier Hoslet/Pool via REUTERS

WASHINGTON: European Union chief Ursula von der Leyen has performed a U-turn over a ban on Russian oil, saying that it would be wiser to continue imports.

In an interview broadcast on US news channel MSNBC, she said yesterday that the EU would do more damage to Russia by continuing to buy Russian oil than via an embargo.

“What we also always have to do is find the right balance between not hurting our economy too much, because this is the strongest leverage we have against this Russian aggression, [President Vladimir] Putin’s aggression,” she said.

The European Commission president said there was a need to think strategically about how the EU approaches the topic of Russian oil. If the EU completely cut off Russian oil immediately, she said, Putin might be able to take the oil that he does not sell to the EU to the world market and sell it for more, filling his war chest.

Von der Leyen would not say how long it would be before a full embargo could be implemented.

“Over time, what we do is get rid of the overall dependency of Russian fossil fuels, all three of them, and never to go back,” she said.

Her hopes that the rest of the world will join an embargo of Russian oil have, however, been dashed with most of the international community rejecting such an approach.

On Saturday South Korea’s state-run gas company Kogas said it would continue to buy Russian liquified natural gas and had no issues, with Moscow accepting payment in dollars.

EU chiefs are due to discuss a new Russian sanctions package.

But Hungary is set to veto a ban on Russian oil, with Prime Minister Viktor Orban having outlined his concerns last week.

Italy’s economy is sliding into recession and Rome has said that a total ban on Russian oil will cost 500,000 jobs, while Germany says it is braced for similar losses in the event of such an embargo.