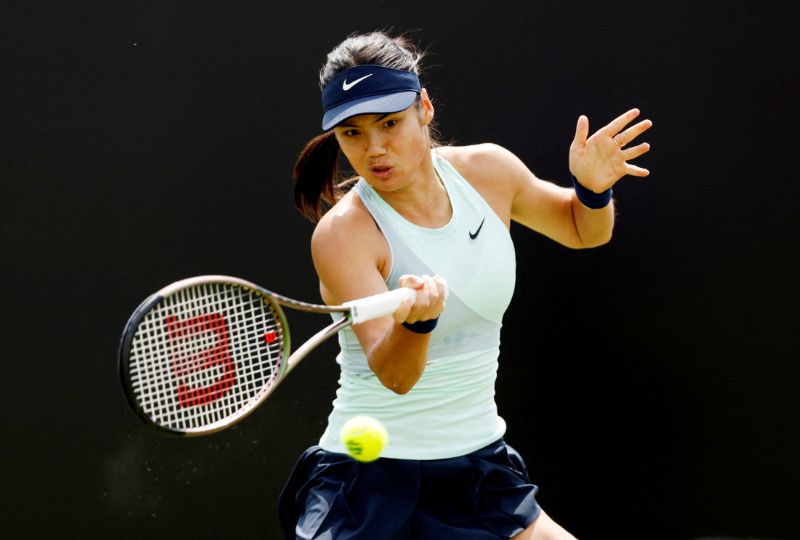 Raducanu in action during the Nottingham Open. ( Reuters photo)

U.S. Open champion Emma Raducanu is hopeful she will be fit to play at Wimbledon after being forced to withdraw from next week's WTA 250 event in Birmingham due to a side strain.

A "freak injury" forced Raducanu, 19, to retire from her opening match at the Nottingham Open on Tuesday but the Briton said on Wednesday she was looking forward to the rest of the grasscourt swing.

"It was disappointing to go out this week with a side injury and unfortunately will no longer be able to play in Birmingham," Raducanu said in a statement released by Britain's Lawn Tennis Association (LTA).

"I'm looking forward to be back on the match court soon though to enjoy the rest of the grass season."

Raducanu shot to stardom in September, 2021 when she won the U.S. Open title as a qualifier, becoming Britain's first female Grand Slam champion since Virginia Wade in 1977.

She has, however, suffered a string of fitness issues since winning her maiden Grand Slam title and was knocked out in the second round of the French Open last month.

Wimbledon will be held from June 27 to July 10. Raducanu reached the last 16 at the grasscourt major in 2021.

Judy Murray, a tennis coach and mother of three-times Grand Slam winner Andy, has said Raducanu needs time to mature physically and should hire experts to help her.

"What's becoming increasingly clear is that Raducanu's body needs time to mature," Murray wrote in a column for The Telegraph.

"If you strip away the fact she was catapulted into this amazing success following her U.S. Open triumph last September, she is no different to any other young player in the sense that her body needs time to fill out, become more robust and resilient.

"It's a process that simply doesn't happen overnight, especially when the physical demands on her body are at an all-time high," Murray said, adding that her son Andy suffered from cramping while moving up from the junior circuit to the ATP.

Murray also urged Raducanu to make more use of female expertise in taking care of her health, highlighting the example of Chinese teenager Zheng Qinwen who opened up about how menstrual cramps derailed her run at the French Open.

"How many of today's top female players, I wonder, are harnessing the peaks and troughs of their cycle and tailoring it to their training and performance?" Murray said.

"How many could feel more empowered by investing in a women's health physio or specialist and making their entourage that bit more female-centric?"

"... the menstrual cycle and its impact on athletic performance is an area of sports science that has been woefully neglected and only now are we beginning to understand its impact on an athlete, both psychologically and physically."