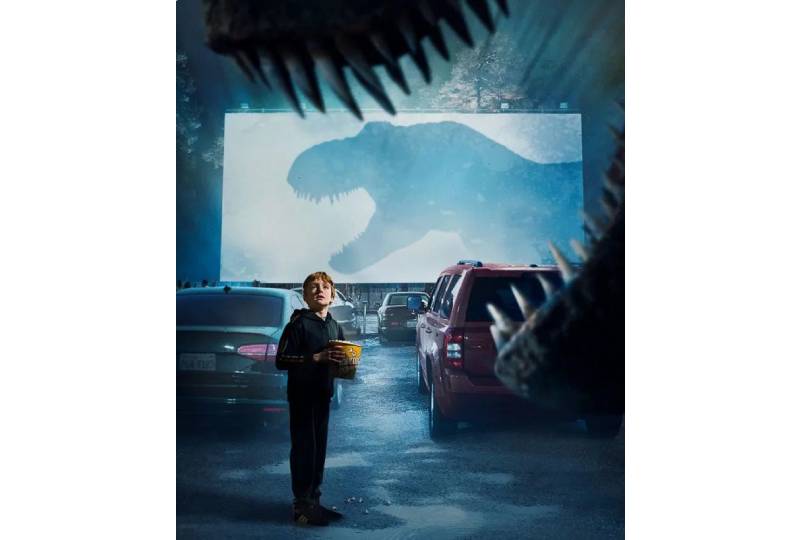 At the end of Jurassic World: Fallen Kingdom, dinosaurs and humans start living side by side. While this sadly doesn’t mean velociraptors are now taxi drivers (always give them a tip) or stegosauruses have decent jobs in IT, it does offer a mouth-watering premise for Jurassic World Dominion to explore; two species separated by 65 million years forced to co-exist together with no electric fences to contain the carnage.

It’s an idea that Colin Trevorrow’s franchise finale ultimately ignores, choosing to once again hem in its characters in confined studio-bound forests and dark corridors. It’s a messy, overstuffed affair but delivers dollops of dino goodness, elevated by the return of franchise holy trinity Sam Neill, Laura Dern and Jeff Goldblum for the first time since Steven Spielberg’s 1993 classic.

If the original is about the beauty of the slow burn, Dominion starts at full pelt, throwing in sea-bound mayhem, a dinosaur rescue and a Wild West-style cattle drive, only with parasaurolophuses. Two plot lines emerge – one a dive into the illicit dinosaur black market, the other an almost secret agent story involving genetically modified prehistoric locusts – unified by the corporation Biosyn.

Dotted throughout are fillips of great action scenes, from a thrilling foot chase and a motorbike pursuit in Malta, a winged serpent taking down an aircraft and a feathered dinosaur (finally) slithering under ice. The best of the bunch is a quieter, more suspenseful sequence as Claire (Bryce Dallas Howard) takes refuge underwater with a huge beastie stalking above. But the film is at its best when focused on its original trio.

It’s lovely to see Dern, Neill and Goldblum sharing the same frame as Alan Grant, Ellie Sattler and Ian Malcolm, respectively, with the dynamic of the serious scientists exasperated by the rock-star chaos theorist still gloriously intact. Goldblum in particular adds swagger and levity to a film in danger of becoming humourless.

More importantly, though, is the fact that their presence in the film isn’t shoehorned. Their paths cross in a very organic matter that easily justifies everyone’s presence in the story. No one trades their character goals for anyone else’s, and they all play a part in saving the world while doing their best to keep the dinosaurs humanity has brought back as safe as they can.

It also provides a sharp contrast to the relatively colourless heroes of the later trilogy, Owen (Chris Pratt) seemingly leaking charisma from film to film and Claire bereft of a character trait you can grasp onto (at least the running in high heels was a thing).

An over-abundance of critters is also an issue which detracts from the awe of seeing them brought back to life, with some particularly ropey digital effects and animatronics that look worse than 30 years ago. Michael Giacchino’s score isn’t anything to write home about either. Anything that makes your ears perk up here is going to be thanks to homages to/riffs on John Williams’ original work.

Ultimately, Jurassic World Dominion is scattershot but entertaining, delivering fun, familiar set pieces. It manages to introduce an impressive marriage between ever-present nostalgia and the constantly evolving challenges of having prehistoric creatures roaming free in our world.