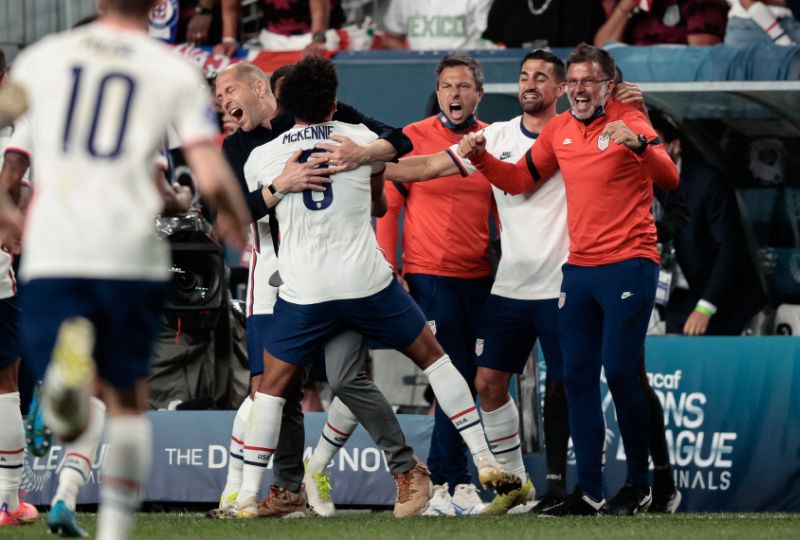 Jordan Morris scored in the first minute of second-half stoppage time as the U.S. men's national team avoided losing at El Salvador for the first time in 30 years with a 1-1 tie in CONCACAF Nations League A Group D play in San Salvador.

Alexander Larin scored for El Salvador in the 35th minute and Mario Gonzalez made four saves, but the Americans rallied in the mud pit when Morris headed in a cross by Luca De La Torre.

Rain prior and during the match and a recent slate of concerts and soccer matches left the field in miserable shape.

The teams finished 10 aside. The U.S. went down a player in the 70th minute when Paul Arriola was shown a red card for his challenge on Larin. Nine minutes later, Ronald Rodriguez denied Yunus Musah a goal-scoring opportunity.

Musah was active the entire match with the first three shots on goal for the U.S. against Gonzalez, who made his best stop on him in the 59th minute. Musah was the recipient of a give-and-go with Timothy Weah, and Gonzalez came well off his line to make the stop.

Earlier, Larin stunned the small crowd with a shot from deep on the left flank that caught goalie Ethan Horvath out of position after the U.S. had dominated play.

Horvath, who made his first start for the national team since June 9, 2021, may have been expecting a cross by Larin and abandoned the left post, allowing El Salvador to score against the U.S. for the time in five matches and assume a lead for the first time in the series in 20 games since 2010.

Forward Haji Wright made his first U.S. start in his third appearance. Just prior to the Larin score, he was open on the dribble following a through ball from Christian Pulisic but sent a shot left of the target.