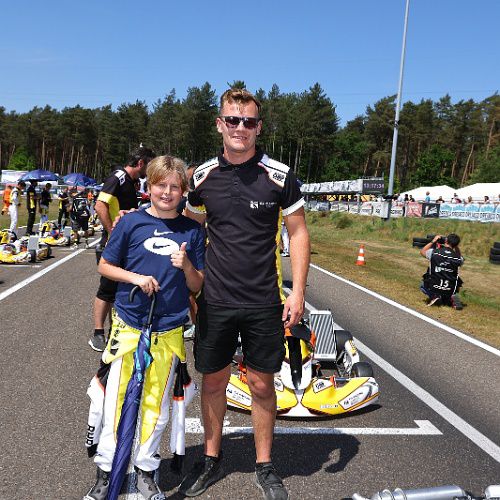 Luca, left, with mechanic Kierle, in Genk during the championship’s first round in May

TEENAGED karting star, Luca Kane Houghton’s bid to win the second round of the 2022 FIA Karting Academy Trophy came to a shuddering halt yesterday in Cremona, Italy when his kart’s engine seized suddenly on the fourth lap of the 19-lap final.

Luca, 13, had already been plagued by misfortune in the qualifying sessions on Saturday when a collision in the first heat, and being forced off the track in the second, relegated him to P15 heading into the final qualifying heat and the race yesterday.

But the teenager, who was born in the kingdom to a Dutch mother and Australian father and has raced for Bahrain since taking up karting five years ago, fared quite well in the last qualifying heat before the race.

But, then, the engine started acting up, he added. “On lap four, it just conked out,” Luca explained. “That meant that my race was over.”

Despite the unfortunate turn of events, Luca, who started the race in Cremona perched at number four on the championship table after the first round last month in Belgium, still has a chance to aim for a podium finish at the third and final round in Le Mans, France, in early September, his coach said.

“Despite all that happened, Luca is still placed 10th on the championship table after this race,” Rashid Almammari told the GDN. “Luca was doing really well. This track is really hard but we’d gone down to P22 after the first two laps and it looked like Luca could pull off a miracle. But, on the fourth lap, the engine packed up so he was forced to retire. Very unfortunate – but, then, that is a part of racing too.”

The team would now focus on preparing for Le Mans where they would try and aim for a top-three championship finish, he added.

“It would be hard to win the championship from here,” Almammari explained. “But, we will be positive and try to finish in the top three. We believe Luca can do it.”

The teenager, meanwhile, was looking forward to the race in France with enthusiasm.

“I like Le Mans,” Luca declared. “I’m pretty good at that track. I raced there in 2019 and I did really well. I’m pretty confident about finishing well there again!”