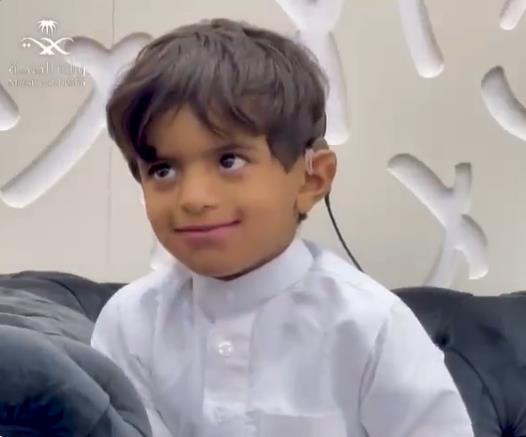 Mecca: A medical team at the otolaryngology department at King Khalid Hospital in Najran has succeeded in implanting a cochlear graft in the ears of a four-year-old boy.

The child’s father, Fadl Al Hilali, told Arab News that his son, Wajdi, was born deaf but this was only diagnosed when he was two years old. The cochlear graft procedure was determined following a series of appointments at King Khalid Hospital in Najran.

Al Hilali said that the operation was preceded by a full examination to ensure the reliability of the auditory nerve and the cochlea. The four-hour operation was performed a month ago, while external hearing aids were added a week ago.

“We have actually started language rehabilitation at the hands of speech therapists at King Khalid Hospital in Najran,” he said.

“The efforts that were made ended the suffering of my child Wajdi from severe hear loss in both ears, which started from a very young age,” he said. “We continued the recurring follow-up at King Khalid Hospital in Najran for two years at the otolaryngology clinic under the supervision of Dr Ali Mahdi Al Qannas and made every effort, and contracted with cochlear implant consultant Dr Ahmed Al Arqbi.”

Al Hilali added: “After the child’s scouting procedures were completed, the cochlear implant was performed in both ears, with the follow-up of Najran Governor Prince Jalawi bin Abdulaziz, until the moment he was cleared.

Joy filled our hearts due to the success of his operation. Thank God there is a six-month treatment plan now for his speech.” Dr. Ahmed Al Araqbi, the doctor who performed the operation, and who is an otolaryngology consultant and a specialist in cochlear implants, said: “The credit is due to Dr Ali Al Qannas, head of the otolaryngology department at King Khalid Hospital, for the great role he played in Wajdi’s surgery.”

Al Arqbi said the child was born deaf and mute. “Hearing aids were tried on him several times, but these attempts were unsuccessful,” he said, noting that in the past hearing aids were the only option for deaf people. If the attempts are unsuccessful, they are transferred to the Institute of Deaf and Mutes where they would be given a certificate of their disability and then carry on with their lives.

Al Arqbi said that with the evolution of medicine in the past three decades, the idea of implanting an internal device around the auditory nerve through which he could hear, speak and lead a normal life was developed. He explained that a very successful cochlear graft operation was performed, and the results were tested and very reassuring.

The child has just started hearing words for the first time in his life, and he must continue to be rehabilitated by specialists to complete the necessary treatment.