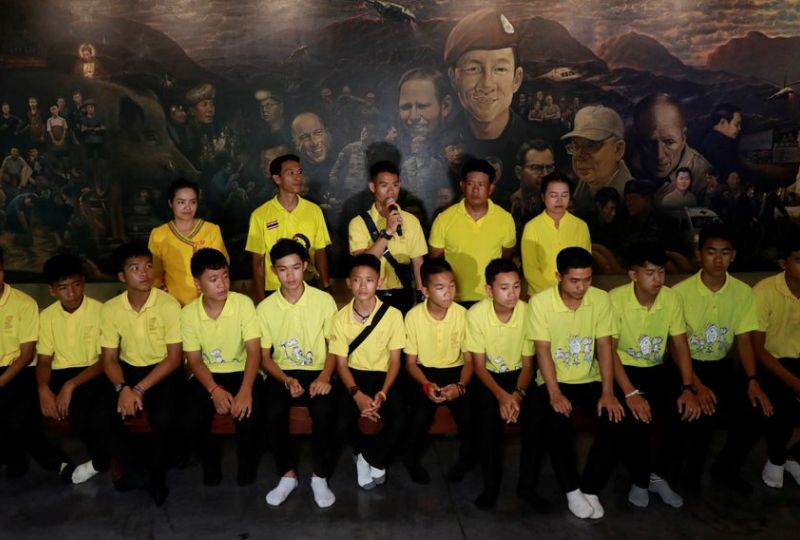 Members of the Wild Boars soccer team attend a news conference during their return to Tham Luang, as they mark the one-year anniversary of being trapped in a cave, in Chiang Rai, Thailand, June 24, 2019. (Reuters photo)

LONDON - Four years on from the dramatic rescue of a group of 12 boys and their soccer coach from a cave in Thailand, their story has been told by Oscar-winning filmmaker Ron Howard in “Thirteen Lives”.

The boys, aged between 11 and 16, and their 25-year-old coach, were exploring the Tham Luang cave in northern Thailand's Chiang Rai in June 2018 when monsoon rains flooded the tunnels and trapped them underground.

They survived nine days in a partially flooded chamber before being discovered by two British divers, but it took Thailand’s elite navy SEALs and international volunteers another eight days to bring them to safety.

"Thirteen Lives" recreates the 17-day ordeal inside the sprawling cave complex and above the mountain covering it where volunteers, engineers and soldiers pumped millions of litres of water out of the cave and drilled through rocks looking for gaps to reach the boys.

“It's stunning what was achieved. It’s not just about the heroic divers, you know, it really is an entire community and a country and a lot of countries ultimately participating and making something amazing come true,” Howard told Reuters at the film’s London premiere on Monday.

“It’s a very contemporary theme that we need to remind ourselves of, and that is how powerful we can all be internationally or on a community level when we pull together.”

The film stars American Viggo Mortensen and Ireland's Colin Farrell as British divers Rick Stanton and John Volanthen, with Australian actor Joel Edgerton taking on the role of Harry Harris, who was brought on to help when options to save the boys were running out.

Thai actors and nonprofessionals were cast in supporting roles and many of the young boys playing the members of the "Wild Boar" soccer team had no previous acting experience.

Stanton and Volanthen and members of the international rescue dive team attended Monday's event, praising Howard's interpretation of the events.

"I think it's good for people to know what happened. It's not a documentary, but it's pretty much true to life,” Stanton said.

"Thirteen Lives" will be released in select U.S. and British cinemas on July 29 and launches globally on Amazon Prime Video on August 5.