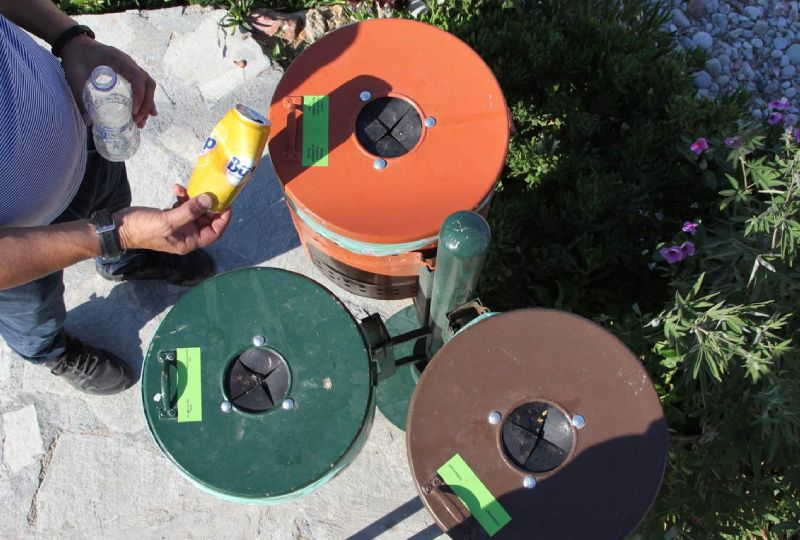 A man places a can in a recycling bin in Tilos, Greece, on July 1, 2022. Thomson Reuters Foundation/Sebastien Malo

TILOS: Before the tiny Greek island of Tilos became a big name in recycling, taverna owner Aristoteles Chatzifountas knew that whenever he threw his restaurant's trash into a municipal bin down the street it would end up in the local landfill.

The garbage site had become a growing blight on the island of now 500 inhabitants, off Greece's south coast, since ships started bringing over packaged goods from neighbouring islands in 1960.

Six decades later, in December last year, the island launched a major campaign to fix its pollution problem. Now it recycles up to 86% of its rubbish, a record high in Greece, according to authorities, and the landfill is shut.

Chatzifountas said it took only a month to get used to separating his trash into three bins - one for organic matter; the other for paper, plastic, aluminium and glass; and the third for everything else.

"The closing of the landfill was the right solution," he told the Thomson Reuters Foundation. "We need a permanent and more ecological answer."

Tilos' triumph over trash puts it ahead in an inter-island race of sorts, as Greece plays catch-up to meet stringent recycling goals set by the European Union (EU) and as institutions, companies and governments around the world adopt zero-waste policies https://news.trust.org/item/20190821000913-et9o3 in efforts to curb greenhouse gas emissions.

"We know how to win races," said Tilos' deputy mayor Spyros Aliferis. "But it's not a sprint. This is the first step (and) it's not easy."

The island's performance contrasts with that of Greece at large. In 2019, the country recycled and composted only a fifth of its municipal waste, placing it 24th among 27 countries ranked by the EU's statistics office.

Greece has taken some steps against throwaway culture, such as making stores charge customers for single-use plastic bags https://news.trust.org/item/20210518035221-siqey.

Still, "we are quite backward when it comes to recycling and reusing here," said Dimitrios Komilis, a professor of solid waste management at the Democritus University of Thrace, in northern Greece.

Recycling can lower planet-warming emissions by reducing the need to manufacture new products with raw materials, whose extraction is carbon-heavy, Komilis added.

Getting rid of landfills can also slow the release of methane, another potent greenhouse gas produced when organic materials like food https://news.trust.org/item/20210618094957-6o1al and vegetation are buried in landfills and rot in low-oxygen conditions.

And green groups note that zero-waste schemes can generate more jobs than landfill disposal or incineration as collecting, sorting and recycling trash is more labour-intensive.

"Technical solutions can be up-scaled, but socioeconomic and sociocultural contexts are always different," he said.

"Every project or programme needs to pay attention to these contexts in order to implement solutions for waste reduction and treatment."

Tilos has built a reputation as a testing ground for Greece's green ambitions, becoming the first Greek island to ban hunting in 1993 and, in 2018, becoming one of the first islands in the Mediterranean to run mainly on wind and solar power.

For its "Just Go Zero" project, the island teamed up with Polygreen, a Piraeus-based network of companies promoting a circular economy, which aims to design waste and pollution out of supply chains.

Several times a week, Polygreen sends a dozen or so local workers door-to-door collecting household and business waste, which they then sort manually.

Antonis Mavropoulos, a consultant who designed Polygreen's operation, said the "secret" to successful recycling is to maximise the waste's market value.

"The more you separate, the more valuable the materials are," he said, explaining that waste collected in Tilos is sold to recycling companies in Athens.

On a June morning, workers bustled around the floor of Polygreen's recycling facility, perched next to the defunct landfill in Tilos' arid mountains.

They swiftly separated a colourful assortment of garbage into 25 streams - from used vegetable oil, destined to become biodiesel, to cigarette butts, which are taken apart to be composted or turned into materials like sound insulation.

Organic waste is composted. But some trash, like medical masks or used napkins, cannot be recycled, so Polygreen shreds it, to be turned into solid recovered fuel for the cement industry on the mainland.

Setting up the project cost less than 250,000 euros ($254,550) - and, according to Polygreen figures, running it does not exceed the combined cost of a regular municipal waste-management operation and the new tax of 20 euros per tonne of landfilled waste that Greece introduced in January.

More than ten Greek municipalities and some small countries have expressed interest in duplicating the project, said company spokesperson Elli Panagiotopoulou, who declined to give details.

NO TIME TO WASTE

Big cities may have the money and infrastructure to efficiently handle their waste, but enlisting key officials and millions of households is a tougher undertaking, he said.

"It's simply easier to engage with people on a more personal level in a smaller-sized municipality," said Noll.

When the island of Paros, about 200 km (124 miles) northwest of Tilos, decided to clean up its act, it took on a city-sized challenge, said Zana Kontomanoli, who leads the Clean Blue Paros initiative run by Common Seas, a UK-based social enterprise.

The island's population of about 12,000 swells during the tourist season when hundreds of thousands of visitors drive a 5,000% spike in waste, including 4.5 million plastic bottles annually, said Kontomanoli.

In response, Common Seas launched an island-wide campaign in 2019 to curb the consumption of bottled water, one of a number of its anti-plastic pollution projects.

Using street banners and on-screen messages on ferries, the idea was to dispel the common but mistaken belief that the local water is non-potable.

The share of visitors who think they can't drink the island's tap water has since dropped from 100% to 33%, said Kontomanoli.

"If we can avoid those plastic bottles coming to the island altogether, we feel it's a better solution" than recycling them, she said.

Another anti-waste group thinking big is the nonprofit DAFNI Network of Sustainable Greek Islands, which has been sending workers in electric vehicles to collect trash for recycling and reuse on Kythnos island since last summer.

Project manager Despina Bakogianni said this was once billed as "the largest technological innovation project ever implemented on a Greek island" - but the race to zero waste is now heating up, and already there are more ambitious plans in the works.

Those include CircularGreece, a new 16-million-euro initiative DAFNI joined along with five Greek islands and several mainland areas, such as Athens, all aiming to reuse and recycle more and boost renewable energy use.

"That will be the biggest circular economy project in Greece," said Bakogianni.