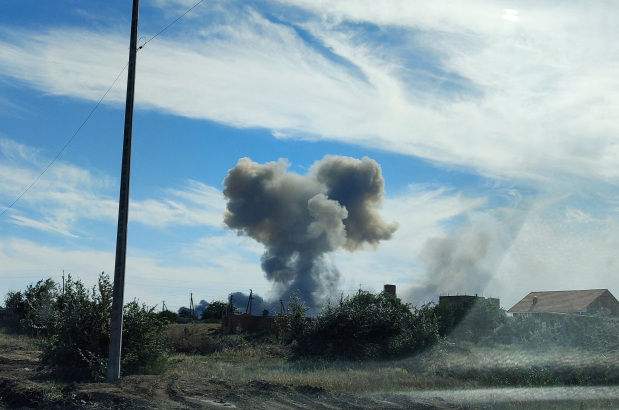 Smoke rises after explosions were heard from the direction of a Russian military airbase near Novofedorivka, Crimea August 9, 2022. Reuters Photo

One person was killed on Tuesday when a Russian air base near seaside resorts in the annexed Crimean peninsula was rocked by blasts that Moscow said were detonations of stored ammunition, not the result of any attack.

Witnesses said they had heard at least 12 explosions around 3:20 p.m. local time (1220 GMT) from the Saky air base near Novofedorivka on the west coast of the peninsula, which Russia annexed from Ukraine in 2014 and used in February as one of the launchpads for its invasion.

Crimea, a holiday destination for many Russians, has so far been spared the bombardment and artillery combat that other areas of eastern and southern Ukraine have suffered.

Russia's defence ministry was adamant the "detonation of several aviation ammunition stores" had caused an explosion, and initially said no one had been harmed. It said there had been no attack and no aviation equipment had been damaged.

Asked whether Ukraine was taking responsibility for the blasts, presidential aide Mykhailo Podolyak told the Dozhd online television channel: "Of course not. What do we have to do with this?"

Moscow could accuse Kyiv of crossing a red line if Ukraine were to acknowledge it had attacked territory that Russia sees as its own.

Podolyak, who advises President Volodymyr Zelenskiy, suggested the blast could be down to Russian incompetence or an attack by partisans.

"People who are living under occupation understand that the occupation is coming to an end," he said.

Russian news agencies quoted an unnamed ministry source as saying "only a violation of fire safety requirements is considered as the main reason for the explosion of several ammunition stores at the Saky airfield."

"There are no signs, evidence or, even less, facts (to indicate) a deliberate impact on ammunition stores," the source was quoted as saying.

Crimea's health department said one civilian had been killed and another eight injured.

Zelenskiy did not specifically mention the blasts in an evening video address but said it was right that people were focusing on Crimea.

"The Black Sea region cannot be safe while Crimea is occupied," he said, reiterating Kyiv's position that Crimea would have to be returned to Ukraine.

Ukraine's defence ministry earlier issued a statement in a heavily suggestive tone reminiscent of its response to unexplained blasts on Russian territory, saying it "once again draws attention to fire safety rules".

The Russian governor of Crimea, Sergei Aksyonov, said a five-kilometre (three-mile) exclusion zone had been established around the air base, which is close to the seaside resorts of Novofedorivka and Saky.

Numerous videos taken from beaches were posted on social media, showing huge plumes of smoke in the distance.

Novofedorivka and Saky are around 50 km (30 miles) north of Sevastopol, home of Russia's Black Sea Fleet, which Moscow leased from Kyiv for decades before seizing and annexing the peninsula from Ukraine in 2014, in a move not recognised by most other countries.

In July, an official in Crimea accused Ukraine of injuring five people in a drone attack in Sevastopol. Kyiv did not comment.