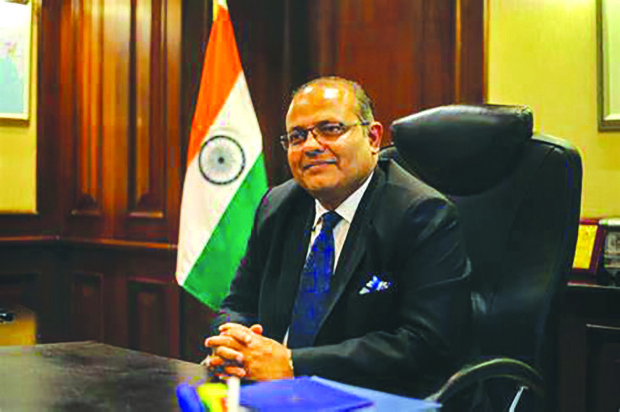 As India celebrates its 76th Independence Day, Indian Ambassador Piyush Srivastava extends his warm greetings and felicitations to members of the Indian community and friends of India in Bahrain.

“This is a historic year for us. We are celebrating 75th anniversary of India’s independence under the theme ‘Azadi Ka Amrit Mahotsav’.

“The celebrations spanning over two years were inaugurated by Prime Minister of India, Narendra Modi, on March 12, 2021, commemorating the historic Dandi march.

“We look at 75 years of our nation’s journey with pride and a sense of fulfilment.

“As a pluralistic society and the largest democracy on earth, India has made tremendous strides in socio-economic development, and in all sectors of economy – agriculture, industry and infrastructure, health, education and services.

“Our scientific and technological advances and giant leaps in hi-tech areas of space, defence, IT, artificial intelligence, renewable energy, pharma and medical are recognised across the world.

“The Government of India’e Atma Nirbhar Bharat (Self-Reliant India) programme and substantial efforts for post-Covid economic recovery have led to India becoming one of the fastest growing major economies in the world today.

“India is steadily claiming its place in the global value chain of manufacturing.

“In the financial year 2021-22, India attracted its highest-ever FDI of about $85 billion. This is testimony to our aggressive push for economic and infrastructure development, as well as business and investor-friendly climate.

“As we take these strides, we have followed the principle of ‘Vaeudaiva Kutumbakam’ i.e. ‘The world is one family’.

“This was evident in India’s leading role in the global fight against the Covid-19 pandemic, the most difficult health and economic challenge the world has seen in recent times.

“With its top class and highly-competitive pharmaceutical industry which is the third largest in the world by volume and world’s largest vaccine production capacity, India provided vaccines, medicines and other medical assistance to more than 150 countries across the world.

“This year assumes special significance as India and Bahrain are celebrating the golden jubilee of establishment of diplomatic relations.

“The historical bonds of friendship and people-to-people connect between India and Bahrain have been strengthened over the years.

“This was evident in the excellent collaboration between our two countries in dealing with Covid-19 pandemic.

“I take this opportunity to express our thanks and gratitude to the leadership and the government of Bahrain for taking exceptional care of the Indian community, including providing free vaccination at par with its citizens, during these difficult times.

“Despite the restrictions posed by the pandemic, our deep-rooted multifaceted bilateral co-operation continued to grow.

“Both sides have held a number of bilateral meetings between the government agencies and private sectors, which led to an increase in collaboration in diverse areas including space, maritime security, renewable energy, health, food security, IT and fintech.

“Our two countries have achieved their highest-ever bilateral trade of $1.65bn, an increase of over 55 per cent from the last year.

“The Indian diaspora has been an integral part of India’s journey and growth story.

“The dynamic and vibrant Indian community in Bahrain has immensely contributed to strengthening our trade, cultural and people-to-people ties.

“They have significantly contributed to the economic development of Bahrain.

“On its part, the kingdom, based on its principles of tolerance and peaceful co-existence, has welcomed the Indian community with open arms.

“I wish continued progress, well-being and prosperity to the friendly people of Kingdom of Bahrain.