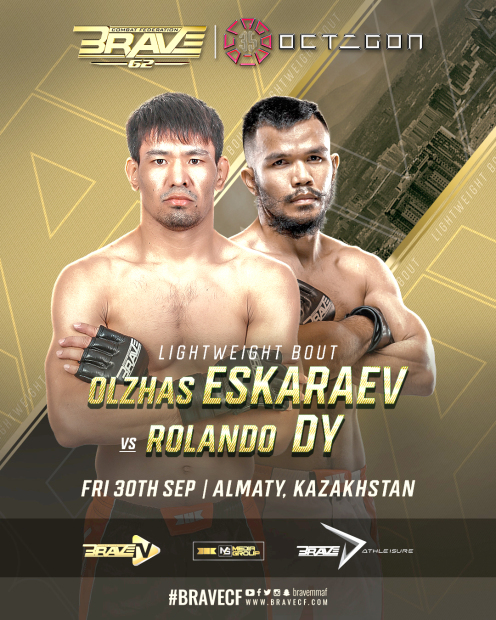 BRAVE Combat Federation is back in Central Asia in association with Octagon League. And the BRAVE CF 62 x Octagon League 35 event, which is set for Almaty, Kazakhstan, on September 30, has its first fights set.

As is usual in BRAVE CF events, top fighters from the host country take on some of the world’s finest, with Kazakh stars Olzhas Eskaraev, Nurzhan Akishev, Ilyar Askhaniv, and Alisher Gabdulin having been confirmed for action.

Eskaraev will meet BRAVE CF 2020 Fighter of The Year Rolando Dy in a huge lightweight bout. Fresh off a very close unanimous decision loss in an interim world title fight, Olzhas will be looking to bounce back against Filipino star Dy, one of the sport’s most seasoned veterans. The lightweight bout is expected to serve as the co-main event of the evening.

Akishev, who earned one of BRAVE CF’s most epic comeback wins in his latest outing, back at BRAVE CF 59, will face off against Mehmosh Raza, from Pakistan, while Alisher Gabdulin takes on Bair Shtepin in a big bantamweight duel.

Last but not least, Ilyar Askhanov will meet Ukraine’s Omar Solomanov in an early contender for fight of the night. It’s expected that the winner of this fight will go on right to the top of the featherweight division and nearing a title shot for the currently vacated belt.

BRAVE CF 62 will put Kazakhstan in a select list of nations that have hosted three or more BRAVE CF shows, in an exclusive club headed by Bahrain, and also featuring Brazil, UAE, Sweden, Romania, and India.