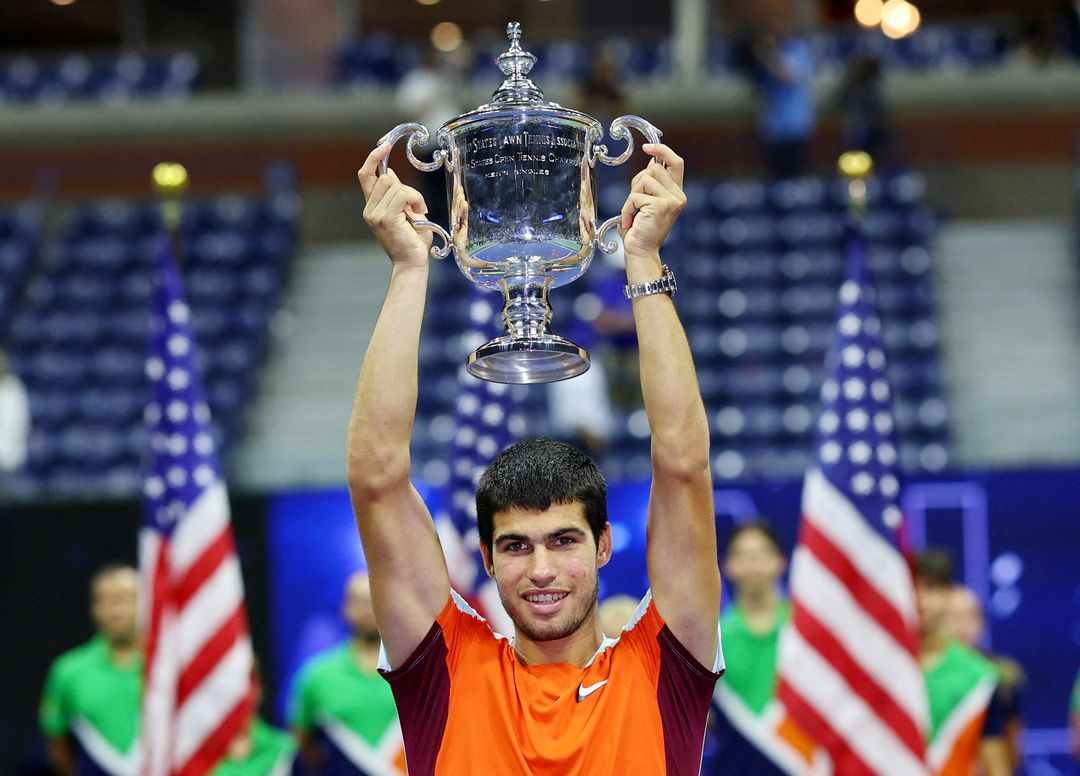 When Rafa Nadal, Novak Djokovic and Roger Federer eventually loosen their stranglehold on the Grand Slams, pundits may view Carlos Alcaraz's US Open victory on Sunday as heralding the changing of the guard in men's tennis.

Having earned his reputation as one of the fiercest competitors among a hungry group of young challengers to the 'Big Three', Alcaraz's win over Casper Ruud not only brought the 19-year-old Spaniard a first major title but also saw him become the youngest world number one in ATP history.

His two-week journey in New York saw him collide with a host of other rising stars, offering the promise of exciting rivalries for fans to enjoy for many years to come.

He battled 21-year-old Italian Jannik Sinner in a thrilling five-set quarter-final that did not finish until nearly 3 a.m. before surviving another five-setter against 24-year-old American Frances Tiafoe, who became the first Black American man to make the semis of the tournament since Arthur Ashe in 1972.

On Sunday "Carlitos" avoided another punishing five-set match but still had to be at his athletic best to score a 6-4 2-6 7-6(1) 6-3 victory over 23-year-old Norwegian Ruud, who rises to number two in the world behind Alcaraz.

The Spaniard's coach, former world number one Juan Carlos Ferrero, said there is no shortage of talent on the men's Tour but he came away from Alcaraz's quarter-final match against Sinner thinking the pair could dominate for the next decade.

"The other day I said that maybe Sinner and Carlos could dominate the Tour for maybe the next 10 years, from what I saw, the level that I saw the other day," he said.

"Of course, there's another players like (Alexander) Zverev, (Dominic) Thiem, Casper, (Stefanos) Tsitsipas, they going to be there, they going to have opportunities to win Grand Slams for sure."

Also making headlines at Flushing Meadows was fiery 27-year-old Australian Nick Kyrgios, who had reached the Wimbledon final and knocked then world number one Daniil Medvedev out in the fourth round in New York.

But while the rising stars command more and more of the spotlight and help attract a younger and more diverse fan base to the sport, it would be premature to say the landscape has shifted.

Nadal won the first two Grand Slams of the year at Melbourne Park and Roland Garros.

Three-time US Open champion Djokovic, who was not able to travel to New York having chosen not to be vaccinated against Covid-19, won Wimbledon.

The 'Big Three' had won 20 of the last 23 majors coming into Sunday's final and finished top of the world rankings in 17 of the last 18 years.

And while the 41-year-old Federer's future in the sport remains uncertain, Nadal, 36, is 38-5 this year and Djokovic will be hungry to match or surpass the Spaniard's record 22 Grand Slam titles when the new season begins next year.

For ESPN commentator Patrick McEnroe, however, the tide is starting to turn.

"It's remarkable to watch Alcaraz play this game, how he's elevated the tempo of this game along with Sinner and Tiafoe and other young guys," he said on Sunday.

"To me it really is the start, it's not the finish, but it's the start of the real changing of the guard in men's tennis."