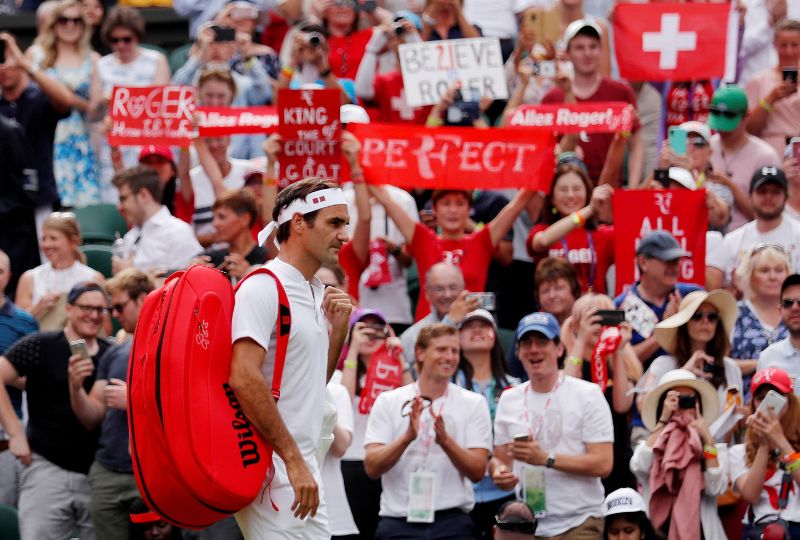 As Roger Federer joined Serena Williams in bringing down the curtain on an illustrious career, tennis moved ever closer to the end of a golden era.

Williams' emotional goodbye at the US Open earlier this month was followed by Federer's announcement on Thursday that next week's Laver Cup in London would be his last professional outing.

Both players had taken their sport to new levels and been proclaimed the best to ever wield a racket, with 43 Grand Slam singles titles between them.

Their departures, along with the fact that Federer's great rivals Rafa Nadal and Novak Djokovic aren't getting any younger, have left fans looking back wistfully at a glorious period in the sport's history.

The 41-year-old Federer's decision was not unexpected given his recent struggles with injuries and form, but it was still met with an outpouring of sadness by tennis fans and former players.

"I wanted to find the perfect way to say this, as you so eloquently put this game to rest -- perfectly done, just like your career," Williams said in an Instagram post, reacting to Federer's retirement.

"I have always looked up to you and admired you. Our paths were always so similar, so much the same. You inspired countless millions and millions of people -- including me -- and we will never forget.

"Welcome to the retirement club."

Like the 23-times Grand Slam singles champion Williams, who in 10 days will also turn 41, the triumvirate of Federer, Nadal and Djokovic have dominated their sport for the last two decades.

And despite spending so many years on the tour, they continue to lure fans to the stands and television screens while their commercial pull still mesmerises brands and advertisers.

Williams's place in the sport was underlined by the fact that her final match at Flushing Meadows was the most-watched tennis telecast in ESPN's 43-year history while the 2022 edition broke the tournament's all-time attendance record.

The so-called men's 'Big Three' revolutionised the sport with their own achievements and riveting rivalries. They won a combined 63 Grand Slam singles titles between them.

Federer played Nadal 40 times while Djokovic faced the Swiss in 50 matches as the trio boosted each other and along with it the sport as a whole and brought in new and old fans.

Yet in recent years injuries to Williams, Federer and Nadal have brought their retirement into sharper focus. Fans and pundits have wondered how the sport would cope with the prospect of losing their most marketable athletes.

With the exit of Williams and Federer in the space of three weeks, the answers could be at hand.

At 36, Nadal is a bit younger, but a chronic foot issue forced the Spaniard to contemplate retirement in 2021 and again this year after he won a men's record 22nd major title at the French Open, playing with numbing injections before each match in Paris.

A radio frequency treatment eased pain in his foot and allowed him to play Wimbledon, but the left-hander does not know whether the injury will flare up again.

The 35-year-old Djokovic is the youngest among the trio, undoubtedly the fittest and appears to be the best bet to keep the flag flying for tennis' older generation.

Nadal's message on social media for his "friend and rival" Federer echoed the mood of the tennis world.

"I wish this day would have never come. It's a sad day for me personally and for sports around the world," Nadal said. (Reporting by Sudipto Ganguly in Mumbai; editing by Toby Davis)