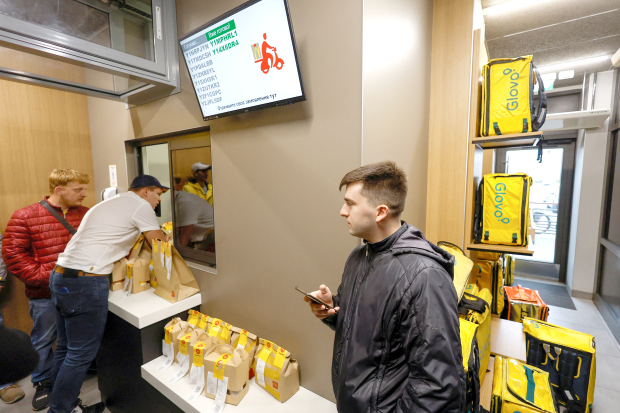 Glovo food delivery couriers wait to pick up orders inside a McDonald's restaurant, after the chain reopened amid Russia's attack on Ukraine, in Kyiv, Ukraine September 20, 2022. Reuters Photo

KYIV: Kyiv residents braved the cold to queue for hours yesterday as McDonald’s opened three branches in the Ukrainian capital that had been shut since the Russian invasion began nearly seven months ago.

The branches only opened for delivery services but customers waited outside the restaurants anyway to collect their meals from the motorcycle couriers who were next to them.

For some, it offered a taste of what life was like before the invasion, and the reopening stood in marked contrast to Russia, where McDonald’s has pulled out its business after a Western backlash against the war.

“I would really like to detach from the bad vibe of the war and be in those times before the full-scale Russian invasion. This (McDonald’s) is what symbolises that time (before the war),” said Denys, an 18-year-old management student.

Demand for the Glovo delivery app surged as a result of McDonald’s reopening, with more couriers working than normal local media reported, citing a press statement.

Anastasiia Tolchynska, a 29-year-old bank clerk, came to the restaurant to collect meals for herself and work her colleagues.

“I am happy we have McDonald’s,” she said, adding “let (international) business support the truth.”

McDonald’s said it planned to re-open more outlets in Kyiv and western Ukraine over the coming weeks and that customers would be able to order and eat inside their restaurants from next month.

Mykhailo, 18, said he last ordered McDonald’s the night before the war began on Feb. 24, when he was having a party with friends.