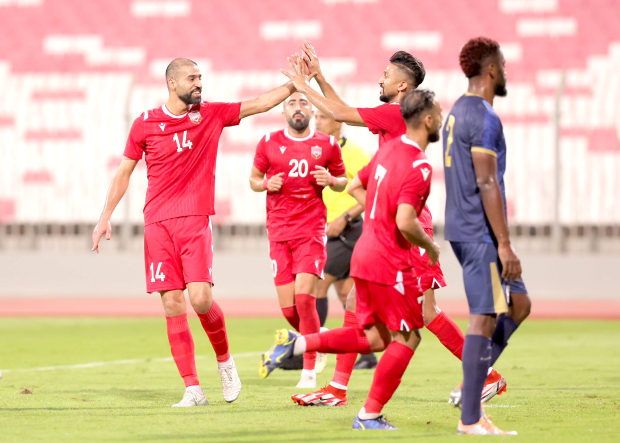 After a combative first half, which ended with the two sides locked 1-1, Cape Verde took what eventually proved to be a decisive lead just minutes into the second half when captain Ryan Mendes scored the second goal for the visitors.

With the pressure on the home side and just half an hour left in the game, Bahrain sought desperately to score the equaliser, with striker Abdulla Yusuf Helal, who had come on as a substitute only minutes earlier, leading their efforts.

But it was Bahrain captain Rashid Alhooty, who ran down the left with twenty minutes to go in the match and tried to plant the ball in the goal with a strong, left-footed kick. Unfortunately, the ball sailed over both Cape Verde goalkeeper Marcio Rosa and the goal.

Just a minute later, Rosa found himself in action again when he fended off an attempt by Helal.

Determined to score that elusive equaliser, Helal featured in the thick of things again after five minutes, when his right-footed kick off the edge of the box forced Rosa to dive full-length to his right to gather the ball.

With Cape Verde on the defensive, Bahrain ratcheted up their attacks and it appeared to be only a matter of time before they would be able to exploit a chink in their opponents’ defence.

That moment arrived with barely seven minutes left in the game. And, once again, it featured Helal.

A nice, looping pass from right midfielder Mahdi Humaidan arrowed straight towards Helal, stationed in the middle of a jostling group of players in the Cape Verde box. But his leaping header flew over the goal, much to the dismay of a small group of spectators in the stands.

Buoyed by this lease of life, Cape Verde tried to resort to the time-honoured tactic of retaining control of the ball and allowing the clock to run out. Unfortunately for Bahrain, the tactic worked.

Earlier, Cape Verde had taken the lead just 13 minutes into the game, when midfielder Kenny Rocha, taking a free kick just 10 yards away from the Bahraini box, curled the ball towards defender Edilson Borges who managed to jump higher and time his leap better than the two Bahraini players next to him and succeeded in heading the ball past goalkeeper Ammar Abbas.

Just 15 minutes later, Bahrain got the chance to equalise when they were awarded a penalty after a rocketing kick by centre midfielder Jassim Alsalam from inside the Cape Verde box hit Rocha on the arm.

Central defensive midfielder Ali Haram stepped up to take the penalty and coolly tapped it into the right side of the net with Rosa fooled into diving in the wrong direction.

That, however, was going to be Bahrain’s lone moment of joy in the match.

The game was the first of three such friendly matches that Bahrain are scheduled to play over the next two months. The next will be played against Panama on Tuesday with the last against Serbia, who have qualified for the 2022 Fifa World Cup Finals. The remaining two games will also take place in Bahrain.