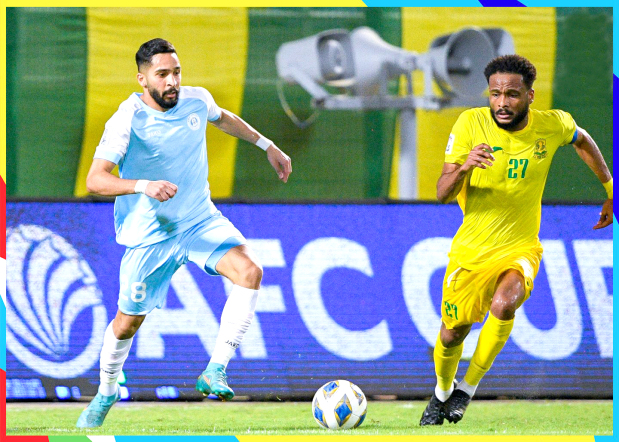 Riffa and Al Seeb players vie for the ball

A mesmerising second-half performance by Al Seeb saw them become the first-ever Omani club to reach the AFC Cup final with an emphatic 4-0 victory against Riffa in the 2022 West Zone final at Seeb Sports Stadium yesterday.

Al Seeb await the winners between PFC Sogdiana of Uzbekistan and Malaysia’s Kuala Lumpur City FC who face-off today in the Inter-Zone final in Jizzakh.

The writing was on the wall from the start with Riffa’s Abdulkarim Al Fardan the busier of the two goalkeepers throughout the opening period, with the hosts attempting 11 shots including five between the sticks before the break but to no avail.

Nigerian midfielder Daniel Ajibola tried his luck from range on two occasions, but his shots were calmly collected by the Bahraini goalkeeper, but it was Muhsen Al Ghassani who came closest inside the first 20 minutes. The lively Mohammed Al Habsi danced around the Riffa defence down the right and chipped a cross for Al Ghassani who headed it straight into the goalkeeper’s hands from six yards out.

Just after the half-hour mark, Abdulaziz Al Muqbali was next in line to test the opposition goalkeeper, and he did so with two left-footed strikes from the edge of the box, but Al Fardan was alert to the threat and made back-to-back diving saves to keep his side in the game.

At the other end of the pitch, Komail Al Aswad’s attempt from close range was smothered by Ahmed Al Rawahi just before the halftime whistle to deny them a goal against the run of play.

Whatever words head coach Rashed Jaber said at the break, they worked magic for Al Seeb who came into the second period with steely determination to find a way through, and it took Al Muqbali just two minutes to hit the back of the net after a cross from the right flank found its way through a forest of legs and past goalkeeper Al Fardan for the striker who was left with the simplest of tasks with the empty goal at his mercy from point blank and he made no mistakes.

Al Riffa thought they had equalised when Hazza Ali supplied a sublime through pass for Mohammed Al Romaihi, who beat the Omani goalkeeper with a lobbed attempt, but he could not direct his finish towards goal and it passed wide.

An injury for Mohammed Al Habsi proved to be a blessing in disguise for Al Seeb within the context of the game as his replacement, Ahmed Al Siyabi, needed just 60 seconds to double the Omani side’s lead. Al Muqbali turned from scorer to provider, latching onto a long ball and outmuscling his marker before squaring for Al Siyabi to sweep home the second.

The win was all but sealed with 10 minutes to go as Ali Al Busaidi found Salah Al Yahyaei with a defence-splitting pass down the left and the latter kept his composure to apply the finish through the goalkeeper’s legs for 3-0.

There was still time for more with substitute Cosmos Dauda getting in on the act deep in added time. The Ghanaian forward found space inside the box and powered home a diving header past Al Fardan to sign off on the victory with the fourth goal of the night.