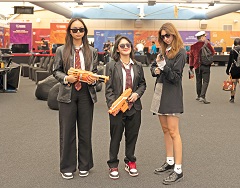 The infectious enthusiasm with which Bahrain’s youngsters have flocked to the Comic Con is a telling sign that, really, for the Baby Boomer generation – that’s us, born between 1945 and 1964 – the time has come to gracefully retire from centre-stage and watch our children and grandchildren set the agenda.

Unfortunately, in Bahrain, much of the dynamics of leisure and entertainment is still geared to what the commercial forces see as the generation which holds the purse-strings.

Most Bollywood (and regional Indian) music shows, for example, are tribute tracks to the golden hits of the Raj Kapoor-era – at the most, event organisers will throw in a mix of 1990s melodies.

In schools and clubs, hundreds of children trot out poems, perform amazing classical dances and give mini-music concerts to win top titles.

I remember my schooldays when I too participated in such events and later, helped to organise them as a young mum wanting to recreate the buzz for kids in Bahrain.

These talent contests are great opportunities for children to polish their presentation and performance skills.

My concern is that they hardly represent the real interest of the youth. For instance, there are no gaming contests, no social media-oriented competitions – (heard of a contest to corral an online bully in 10 minutes?) and no team challenges.

The sheer scale of these competitions are enough to guarantee burnout for all the stakeholders – the spectators, participants and importantly, the judges whose judging skills are seriously impacted by the vast number of contestants.

I was approached to volunteer as judge for one such event – the organisers kindly gave me a heads-up that the event would run into four hours and showcase more than 50 children. I think after the first 10 kids, unless its JK Rowling at the podium, all of us would tune out!

We need to re-think these old tropes of prepared debates (where, I suspect the whole extended family comes together on Zoom to contribute ideas), set-piece song and dance etc as ways to assess talent and skills.

Let’s ask the contestants what they want instead of foisting ‘seventies style student fests upon them. Competitions that broaden knowledge, nurture the ability to think on one’s feet, communicate and listen, foster teamwork and make basic tech use an integral part of the mix and importantly, specific challenges that exercise the youngsters’ ethical perceptions – now, these would require organisers of youth fests to reimagine how the contests would challenge young people in a more useful and contemporary way.

We are long past the zone when kids who win the Top Talent Title in Club X are guaranteed success all their life.

Very few of the winners of these titles are still dancing or singing when in their thirties – unless its Priyanka Chopra. But contests and games based on team bonding and quick thinking will underpin even failure.

Look at Twitter’s ex-CEO Parag Agarwal. Even when fired, he managed to walk away with a payment of $44 million and his knowledge and reputation shiny enough to reboot his life.

That’s a prize we need to prep our kids for.