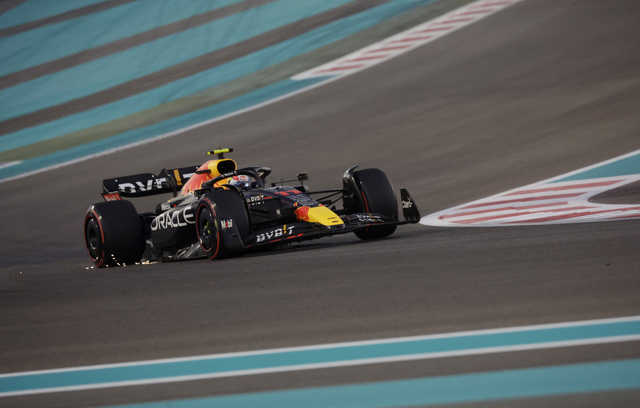 The 32-year-old Perez, hoping to wrap up second place in the overall standings behind world champion Verstappen on Sunday, lapped the 5.2-kilometre track in one minute 24.982 seconds, 0.152 seconds quicker than the Dutchman.

But the seven-times world champion, still hunting for his first victory of the year to keep his record of winning a race every year intact, is under investigation for passing two cars under red-flag conditions.

Lando Norris took fifth for McLaren ahead of Ferrari's Charles Leclerc, who is level on points with Perez and the Mexican's main rival for second in the overall standings.

Carlos Sainz was seventh in the other Ferrari ahead of Daniel Ricciardo who finished his final practice session for McLaren in eighth.

Sebastian Vettel, who is calling time on his career after Sunday's race, was ninth for Aston Martin ahead of Williams racer Alexander Albon who rounded out the top 10.

Saturday afternoon's hour-long session was the last chance for teams to dial their cars into the track ahead of qualifying later on Saturday.

The session was briefly halted to clear away debris from Pierre Gasly's AlphaTauri after the Frenchman pulled into the pits with a spectacular puncture.