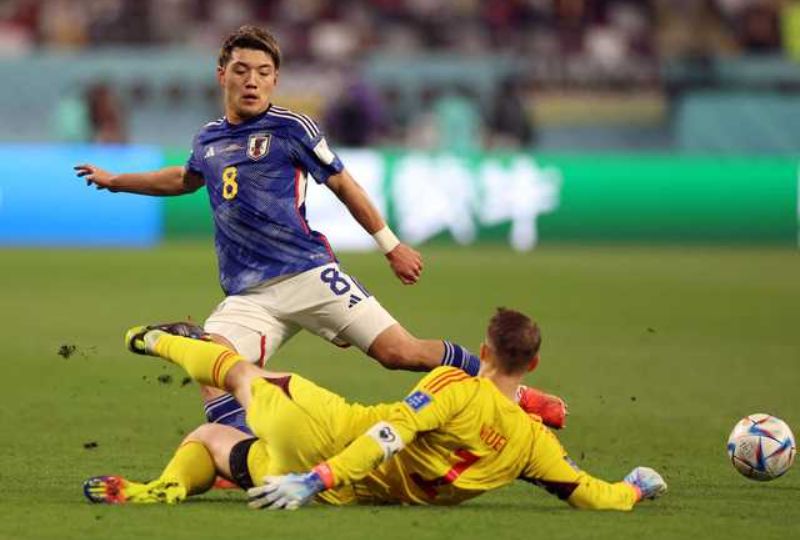 Late goals by substitutes Ritsu Doan and Takuma Asano gave Japan an incredible 2-1 comeback victory over Germany in the World Cup yesterday in another emotional fillip for Asian football after Saudi Arabia’s shock win over Argentina.

Four-times champions Germany had looked to be cruising to a routine victory via Ilkay Guendogan’s first-half penalty but paid a fatal price for profligacy in front of goal.

Doan equalised in the 75th minute before Asano smashed home the winner in the 83rd for a stunning turnaround.

“We wanted to start playing aggressively, we wanted to dominate the game,” said Japan coach Hajime Moriyasu, whose second-half changes changed the whole feel of the game. “But Germany are very strong so we needed to defend persistently and take our chances.”

It was certainly a subdued atmosphere in the ground until Germany’s early dominance was rewarded when Joshua Kimmich picked out David Raum in acres of space in the box and goalkeeper Shuichi Gonda clumsily brought him down as he turned, with Guendogan dispatching the penalty in the 33rd minute.

Kai Havertz knocked in what he thought was a second in first-half stoppage time but that, like an early effort for Japan’s Daizen Maeda, was ruled out for offside.

There was initially little change to the pattern in the second half as Jamal Musiala shot over after a penetrating run and Guendogan clipped a post when he should have scored.

There then came a thrilling spell when Gonda made amends by somehow making four successive quickfire saves to deny Jonas Hofmann and Serge Gnabry, keeping his side in the game.

Neuer, appearing in his fourth World Cup, had barely touched the ball but then had to save from Hiroki Sakai as Japan finally found some attacking spark. He did well again to block from Takumi Minamino only for fellow substitute Doan to gleefully knock in the loose ball.

Japan pushed on and Asano, inexplicably left to roam by Antonio Ruediger, then showed great touch to bring down a high Ko Itakura free kick. He then held off defender Nico Schlotterbeck before hammering the ball into the smallest of spaces.

Germany launched all-out attack from then on, to no avail, and now face a potentially must-win game next against Spain.

Later, former champions Spain got their World Cup off to a pulsating start through a record 7-0 win over Costa Rica while Belgium opened their campaign with a scrappy 1-0 victory over Canada.