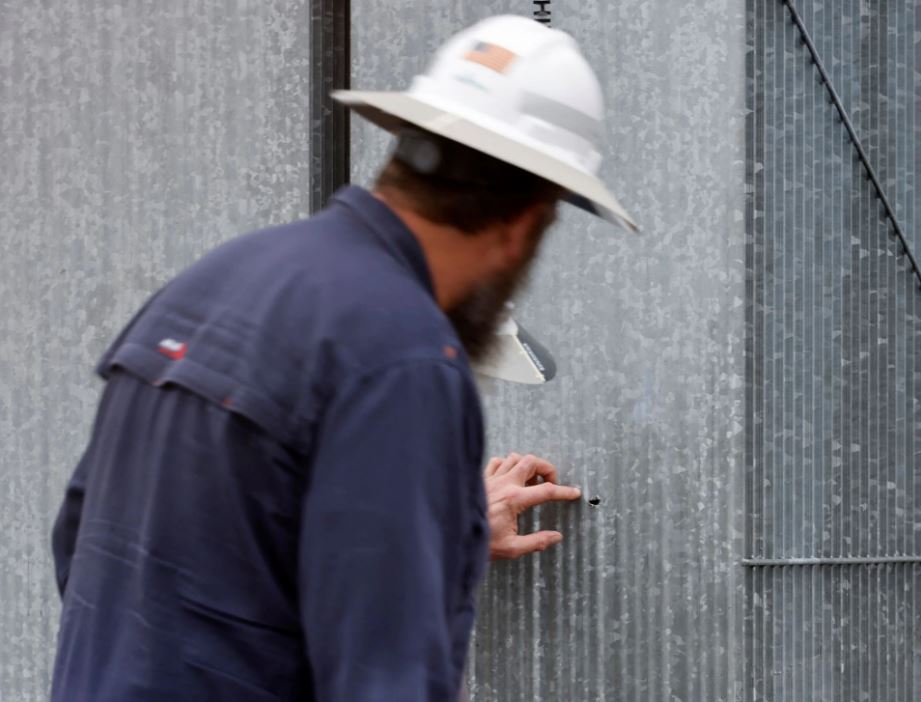 Duke Energy workers inspect what they said was one of three bullet holes that crippled an electrical substation after the Moore County Sheriff said that vandalism caused a mass power outage, in Carthage, North Carolina, U.S. December 4, 2022. Reuters Photo

The orchestrator of gunfire attacks on power stations in North Carolina that left nearly an entire county without electricity for a second straight day knew "exactly" how to disable the stations, sheriff Ronnie Fields said on Monday.

Fields' comments came as North Carolina Governor Roy Cooper warned of a "new level of threat" posed by the incident and called for hardening of critical infrastructure including the power grid.

“Protecting critical infrastructure like our power system must be a top priority,” said Cooper, a Democrat, in a press briefing on Monday.

"These kinds of things cannot happen."

Asked if the attack was being investigated as an act of domestic terrorism, Cooper said only that "investigators are leaving no stone unturned."

Schools in Moore County will be closed for a second day on Tuesday and 38,000 households were still without power amid freezing nighttime temperatures after the Saturday shootings.

Utility workers investigating the outages found gates broken and evidence of gunfire damage to equipment at two substations in Moore County, an area popular with tourists and known for golf resorts including Pinehurst, which has hosted the US Open and Ryder Cup tournaments.

Authorities are keeping details of the investigation close to the vest, saying only that the damage was done by firearms. However, Fields on Monday indicated that whoever orchestrated the attacks knew how to take out the substations.

The saboteur "knew exactly what they were doing to cause the damage and cause the outage that they did," Fields said.

Federal agencies including the FBI and the US Department of Energy are investigating the shootings, along with local and state law enforcement. So far, none have suggested a motive and no arrests have been announced.

US President Joe Biden was briefed on the incidents, the White House said on Monday.

"Early evidence suggests that it was deliberate and the investigation is under way," Department of Homeland Security Secretary Alejandro Mayorkas said in a briefing.

On Sunday, Fields said law enforcement had not found evidence to support online speculation that the attacks were a protest against a planned drag show set for Saturday. Organisers of the show at the Sunrise Theatre in Southern Pines said that far-right activists had been trying to shut down the show for weeks, the Fayetteville Observer reported, citing the theatre's executive director, Kevin Dietzel.

The newspaper reported that the show was held on Saturday despite the power outages.

Duke Energy, which provides power to the area, said it had restored electricity to about 7,000 customers by Monday afternoon, from a total of 45,000 who had lost power after the shootings. That is nearly everyone who the company serves in Moore County, spokesperson Jeff Brooks said at a press briefing on Monday.

Brooks said that for most customers, power would likely be out through Wednesday or Thursday, because the damage to the two substations was extensive, and requires complicated parts and repairs.

He said the difference between the needed repairs and a simple blackout repair was like comparing the need to change a lightbulb to the need to replace the entire heating and air conditioning system of a house.

"We are restoring customers where possible, but the damage is beyond repair in some areas," Jason Hollifield, Duke Energy’s general manager of emergency preparedness, said in a statement on Monday. "That leaves us with no option but to replace large pieces of equipment – which is not an easy or quick task.”